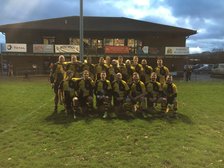 BRAINTREE’s bright start to the season suffered a jolt as they were brought down to earth with a bump by a strong Old Cooperians side on Saturday.

BRAINTREE’s bright start to the season suffered a jolt as they were brought down to earth with a bump by a strong Old Cooperians side on Saturday.
Having beaten rivals Harlow 13-10 at Robbs Wood seven days earlier, the black and ambers travelled to Upminster with high hopes.
But they were left to rue missed chances in a game they should have won, as the ruthless home side got the better of Tree in the finishing stakes.
Tree started well and took the lead after just two minutes thanks to a penalty from winger Elliot Swallow. 3-0.
Old Coops hit back just five minutes later though courtesy of a try from Reed that was converted by Bly. 3-7.
Swallow then an unconverted try out wide to give his side a narrow 8-7 lead on 18 minutes before Bly notched a penalty to nose the hosts in front seven minutes later. 8-10.
It was Tree who went into the changing rooms with their noses ahead though, as winger Glen Whyatt scored try number two, Swallow converting for a 15-10 interval lead.
The hosts regained the lead three minute into the second half courtesy of a try from Holmes that was again converted by skipper Bly. 15-17.
Swallow then added his second try of the game for Tree out wide in a topsy-turvy period of play to put his side 20-17 in front on 46 minutes.
Three more converted tries followed from Coops, two of them from Bilton, as they stormed into a 20-38 lead after 68 minutes.
Outside centre Josh Levy pulled a try back for Tree in the 74th minute to reduce the deficit to 25-38, but they ran out of time.
Disappointed BRUFC Head Coach Jamie Clarke said: “I thought it was a game we should have won.
“We had the beating of them when we went wide and all four of our tries were scored in that fashion, which is very positive for us going forward.
“It was a close game and I'm proud of all the players who were a bit unlucky on the day. We are going in the right direction and I saw much to be positive about today.”
Tree return to London 3 Essex when they entertain Barking at Robbs Wood this Saturday.
BRUFC: Whyatt, Doughty, Levy, J Young, Swallow, Dann, Page, T Colebrook, W Turner, Hardin, Mlambo, Thompson, M Pickles, Humphreys, C Kerr. Reps: M Benfield, H Stanhope, Worster.