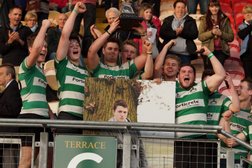 An impressive display of power, skill and teamwork saw Buckingham run out 53-10 winners over Olney in the sun at Franklins Gardens

In glorious sunshine at Franklins Gardens, Buckingham beat Olney 53-10 to lift the Oceanic Trophy for the first time in the club’s history. An immense performance by all 22 players saw them dominate a very good Olney side in all phases of the game.

From the kick off Buckingham’s aggressive defence put Olney under pressure with big tackles from Thom Foster early on. As Olney tried to run the ball from their 22 they were hammered back and caught behind their try line they conceded a 5 metre scrum to Buckingham. Ollie Toone came off the back of the scrum and popped the ball to Foster who went over for the first try.

The next 10 minutes saw Olney’s dangerous back line almost breaking through on a number of occasions. Penalties from Buckingham gave Olney territory but they struggled to capitalise on this due to turnovers and problems in the set piece. Euan Freer caused Olney serious problems in the lineout whilst Buckingham dominated the scrum, Archie James taking four against the head throughout the game and Olney finding themselves driven back off their ball. Olney eventually converted their pressure into 3 points following yet another Buckingham offside penalty but that was to be their lot for some time.

Within a few minutes Buckingham had extended their lead to 10-3 as, despite the kick off not going 10, they took the ball at the scrum and breaks from Tom Silman and Elliot Pittwood put Craig Coxon over in the corner. A penalty soon after the restart gave Buckingham opportunity to get back into the Olney 22 and it was Olney’s turn to give away a series of penalties and Buckingham’s to not have enough control to turn them into points. Kicking out of danger to half way, Olney found Pittwood who did what he has been doing all season and ran the ball back through the Olney team to score Buckingham’s third. With Olney still looking to run the ball at the Buckingham defence and Buckingham controlling the set piece and taking the ball through the phases before releasing their backs, there was just time for one more try by Foster before the half time whistle.

Olney’s restart was followed quickly by a penalty to Buckingham that gave them a lineout just outside the Olney 22. A trademark maul from the lineout took Buckingham up to within 5 metres of the Olney line and shortly after quick ball saw Max Nagy put through Archie James on the inside for his first. Nagy then managed the first conversion of the day for a 27-3 Buckingham lead. As Olney failed to put the restart 10 metres and Buckingham attacked once more through Toone off the back of the scrum and then down the back line, that same combination saw Nagy break the Olney defence and put James in for his second, duly converted.

As Buckingham began to ring the changes in the team, Harry Lewis came off the bench to score with his first touch of the ball. Despite the score, Olney battled on and Buckingham found themselves depending on the tackling of the likes of Arthur Doyle and Harry Brown to keep Olney pinned in the centre of the pitch. Olney’s ambition eventually cost them as Buckingham chased down their line, turned over the ball and set Joe Kayll off on a bullocking run through the line. A quickly taken penalty gave Will Ellis the opportunity to cut through for the next try.

As Brown took the restart and Lewis and Tom Miler drove back into the Olney half, it looked as if the story would continue, but for the first time Olney found a chink in Buckingham’s armour and their scrum half ran through some half-hearted tackling to give Olney a converted try and take them into double figures. The final say was Buckingham’s however, under the cosh from a soaring penalty count they raised their game and a cross kick gave Coxon his second and the final score of the match.

This was Buckingham back at their best. Dominant up front and in the set pieces; rapid line speed from the backs in defence; solid tackling; great handling and interplay between backs and forwards; an all round team performance under the inspiring leadership of captain, Michael Keating. Although difficult to pick out any individual amongst the great performances on show, Archie James received the Man of the Match award and in the presence of photo’s of the sorely missed Toby Fairclough, Keating lifted the Oceanic Trophy to the applause of a large and appreciative crowd.

Thanks to Olney for giving it all they had right to the end, to the officials and to Northampton Saints for giving us the opportunity to play at the home of the finest Premier Division team in the country

Changing rooms under the Burrda Stand open at 5pm : warm up asap after 5pm on the back pitch : all players back in the changing rooms for 5:50 latest