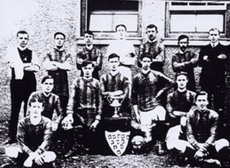 At a meeting at Cwm y Gl&ocirc; during February 1922, the Eryri Football League was formed, the founder members were Rhythallt Comrades, Glasgoed Rangers, Llanberis United and Ebenezer. Soon after Rhythallt Comrades and Glasgoed Rangers amalgamated to form Llanrug Football Club, and were members of the Welsh National League - Division III (West). The home fixtures were played at Cefn Llwyd, and in that very first season the club reached the final of the North Wales Coast Football Association - Junior Cup. The match was played at Colwyn Bay, but unfortunately Llanrug lost the match by four goals to nil against a very strong Oakenholt side. A grand total of £28/1/1½; profit was made by the club during that very first season, which is equivalent to about £28.06 in today's money - the travelling costs alone totalled £64/2/10 (£64.14).

During the 1924-1925 season the name Llanrug United appeared for the very first time, and the following season they were the Welsh National League - Division III (West) champions. In the 1926-1927 season Caernarfon Football Club joined the Welsh National League 1st Division, and for some reason or other Llanrug United did not have a team in the league, and as a result there wasn't a league side in the village until the 1932-1933 season.

In the meantime, during October 1933, a new playing field was given to the village of Llanrug by the Mayor of Caernarfon Mr D. Elliot Alves (who later donated the famous Alves Cup). Mr Alves was the proprietor of the Bryn Bras Castle on the outskirt of Llanrug. The following year during a meeting at the Memorial Institute, Llanrug Institute Football Club was formed, initially to play friendly matches, and eventually they joined the Bangor & District Football League for the 1932-1933 season. Mr Alves was elected as the club's president, and the home fixtures were played on the new 'Recreation Ground' which he donated to the village.

This is the first season on record that a fixture took place between local rivals Llanrug and Llanberis, the score being - Llanberis 4 - 1 Llanrug Institute. At the end of the season Llanrug were fourth and Llanberis were fifth in the final league table. In October a North Wales Coast Football Association - Junior Cup 1st Round tie had to be switched from Llanrug to Trefor, because the Recreation Ground was not up to the satisfactory standard required. A dance evening with the Hedley Moffat Band was held during December at the Church Hall, to raise fund for the club.

During a North Wales Coast Football Association meeting in June 1934, it was reported that numerous illegal football matches were being arranged in several areas outside the official football season. It was decided not to allow those participating in these matches to join the League in the forthcoming season. Many of these illegal matches were staged at Llanrug, and as a result five players, and all the officials of the club and the pitch were banned from the League. But by September in the same year, the ban on the officials and the pitch were lifted, as it was proven that they had no connections at all with the matches played during the summer months. The pitch belonged to the village of Llanrug, and the football club only had a privilege for its use between the hours of two and five on Saturday afternoon during the winter months.

In April 1937 the club resigned from the Bangor & District Football League, and the following season the League was abolished, due to lack of interest and support. The club did not join any League between 1937 and 1939, and for a very prominent reason no football was played at any level between 1940 and 1945.