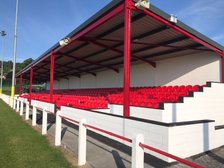 All three DTFC teams in friendlies this weekend

With the football season starting in a few weeks time all three of our senior teams have been in training for several weeks. This weekend sees them all in action for the first time in pre season friendlies

On Friday 5th July our First Team are playing Rhostyllen with the game being played at Maes Tegid, Bala with a 7.30pm kick off. Over the close season the management team of Dewi Llion and Owain Roberts have assembled a mix of existing and new players to the squad and the game has an added interest with Rhostyllen having appointed ex Denbigh star Warren Duckett as their manager over the summer months.

Then on Saturday 6th July the Reserve Team are playing away at Henllan with a 2.00pm kick off time. New manager Nick Hailes is taking a youthful side to the match as he takes charge of his first game in charge. Nick has been really pleased with the attitude and numbers at training over recent weeks and now looks to see how his players are in action in match conditions.

An hour later at 3.00pm the Denbigh Development Team are playing recently reformed Denbigh Wanderers team on the Rec next to Central Park. New manger Craig Morris has been encouraged by the number of youngsters that have attended the training sessions recently and this give him an opportunity to see how his team perform against the more experienced mature players of the Wanderers who are managed by Kev James.

All of the teams would welcome your support - the weather forecast is good, so come along and see the teams in action