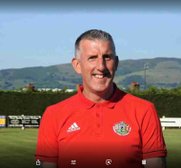 Following a successful season when our Reserves finished the season as Runners Up in the Lock Stock Welsh Alliance Reserves league both Manager Kev Roberts and coach Gareth Hughes have advised the Club that they wish to stand down from their duties.

The pair joined forces in the Reserves along with Johnny Roberts in September 2017 and the trio have seen their team develop over the last two seasons .

In the 2017/2018 season the team achieved Runners Up spot and finished that season with eight wins on the run . This season they finished on a run of fourteen unbeaten games. They secured second position in their last game of the season last week when they beat Colwyn Bay 4-1

Since he took over the role Kev has gained the respect of the players, committee and supporters with his hard work ethic and his positive attitude which has helped the team move forward. Many of his young Reserve team players have progressed well and moved on to play for the First Team. The style of football he likes to encourage is attractive and has gained the plaudits of both home and away supporters.

Kev will continue to manage the Under 16's team next season where once again he has developed a group of players over the years into a strong unit.

Gareth has been a great help to Kev and the Reserves with his commitment and encouragement. He has developed a great rapport with the players and will be sorely missed. He now looks to concentrate further on his other sporting passion of bowls where he is an accomplished player. He will however still be seen around Central Park as he will
occasionally help out on Match Days as a steward.

The Club would like to thank both Kev and Gaz for their work within the Club and wish them well for the future.