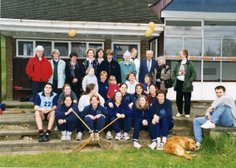 Hatch End Ladies Lacrosse Club, as it then was, began in the season 1948. The club still has its original constitution, minutes books and match reports dating right back to its foundation.
The club held a game to celebrate its 21st anniversary in 1970. The match programme describes the club as "thriving" and notes that in that year it was able to field 2 teams on the same day (and beat Putney; a new experience!) it adds. There was a further reunion in in 1998 to celebate the clubs 50th anniversary in 1998 and a number of those players are still with the club today.

The club's first home ground was Bedford College, Headstone Lane. In 1966 it moved to King's College Playing Fields Ruislip, and then to Kenton in 1981, before relocating to the Royal Masonic School in Rickmansworth where the club played until 2012, when following a period of prolonged heavy rainfall, badgers tore up the lower pitches making them unusable! The club relocated its home ground to Cow Roast, nr Berkhamsted, in 2012 and now play and social regularly at Tring Park Cricket Club in 2014.

The club's original kit was "white blouse with red vertical stripes, dark blue shorts, red socks, and a blue cardigan". The club's minute book notes with relief the end of clothes rationing in 1949, making it possible for everyone to wear the same kit. The colours first changed to pale blue and navy in 1967. Rugby shirts arrived in the 1980's, polo shirts in the 1990's and 2008 saw the arrival of slim fit shirts, under armour, gilets, training vests, T-shirts, hoodies and coats.

A quick tally in 1999 showed that in its first 50 years the club had played 1040 games, won 440, drawn 77 and lost 513. The club has produced a number of Territorial and England players over the years and has always managed to overcome lean spells in its history when it has been harder to put a team out.

Today, the club prides itself on providing "lacrosse for everyone" and players age from 9 to 50 plus. The club reached a high point in 2013 when no less than 8 Hawks players represented England and Ireland at the Home Internationals in Edinburgh. As well as the senior teams there are regular training sessions and matches for our juniors. The club has a lively social scene, with regular nights out, fun tournaments and the annual overseas tour.

In 2017 we are intending to field several teams in the tournaments running alongside the World Cup hosted at Surrey Sports Park.