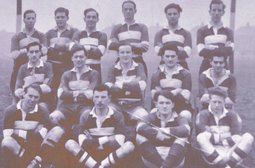 WHO WE ARE AND OUR HISTORY
Ilford Wanderers is a well established Rugby Union club (Founded 1896) situated on the London / Essex boundary. The IXV play in LONDON SOUTH EAST 3 (Level 8)
We are running 4 senior sides IXV, IIXV,IIIXV & MAULERS playing in merit table divisions of a similar standard.
The SABRES team is also a development squad designed to give experience to emerging junior players as they enter senior rugby.
We have a thriving Junior section presently offering a range of teams .Throughout the season young players join the club so it may be possible that other teams will be formed.
INTERESTING FACTS about the Club and its Players 1896-1998
The Club was founded in 1896 by F.C. Potter-Irwin, assisted by A.J. Magson.
Up to 1980 the Club played at Gordon Fields continuously since its formation, except for the two seasons 1911-12 and 1912-13, when the Rectory Field, Manor Park, was used. In July 1980 the Club purchased and moved to its present home in Forest Road, Barkingside.
The first seven-a-side competition to be played in England was organised by Ilford Wanderers in April 1926-one week prior to the first Middlesex "Sevens". Wasps and old Blues drew 3-all in the final.
The first floodlit Rugby Union match in England took place at Gordon Fields on 3rd December 1936, between Ilford Wanderers and Old Bancroftians.
Of Eastern Counties Presidents between 1890 and the present, four were Ilford Wanderers- F.C. Potter-Irwin, A.G. Bowers, B.G. Best and E.G. Tweedy.
Between 1900 and 1906 all Eastern Counties home matches were played at Ilford. Altogether 21 "Counties" matches took place at Gordon Fields between 1900 and 1937
After holding every office with Eastern Counties, F.C. Potter-Irwin was elected Vice-President of the Rugby Union and won international renown as a referee. He had the unique record of refereeing six Varsity Matches.
E.G. Tweedy, a Past President of the Club was elected President of the Essex County R.F.U. for 1964-5, and re-elected in 1965. In 1969-71 he was elected President of Eastern Counties R.U.
E.G. Tweedy was elected Club Captain in 1938. His son, G.Tweedy, became Club Captain in 1971- 33 years later.
In 1972 the Club was honoured by the visit of the President of the Nova Scotia Rugby Football Union. This was Derek Kersley, for many years a Wanderer
W.J.K. (Kitch) Heighes was honoured by Essex Rugby Football Union as their first Life Member
In 1978 Ilford Wanderers was the first club to be honoured as "the best club of the year" by the Redbridge Sports Council.
In the summer of 1980 the Club moved to a new home at Barkingside, becoming the proud owners of three pitches, cricket square,
The Redbridge Sevens Tournament for Borough and Guest sides was held on 29th March 1980, when Fairborn House were the winners.
In 1981 William Gardner who played for the club in 1911 made another visit from the U.S.A. and was entertained to dinner; he unveiled a plaque commemorating his donation of the Presidents` and Captains` Honours boards in the Club lounge.
The Ernie Tweedy Shield was presented by the Club to the Essex Rugby Union for an annual Under 21 inter-club competition. In the first competition in 1981 the shield was won by the Wanderers Under 21 XV.
In May 1986 Ilford Wanderers organised a Schools "Sevens" competition in aid of Sports Aid, the famine relief agency, a total of nine schools taking part, with over £200 being raised.
B.M. Hanner, a Past President of the Club, served as president of the Essex County R.F.U. from 1984-86.
In 1986 the Club presented to Essex County R.F.U. a new cup to replace the Essex Regiment Shield, which Ilford Wanderers originally presented to Essex Rugby in 1969 to record the close association the Club enjoyed with the Essex Regiment at Gordon Fields. The Essex Senior Cup is played for annually with the winner going forward to the Eastern Counties Competition.
The old Essex Regiment Shield (the Essex Cup) was re-Presented to Ilford Wanderers at the County Dinner in May 1987 and will be held by the Club in perpetuity.
On 5th March 1988, two former Wanderers, Damian Cronin (Scotland) and Jeff Probyn (England) played in the Calcutta Cup match at Murrayfield. Both had played at Colts level for Ilford Wanderers, with Cronin also playing at senior level before going on to the first class clubs.
Damian Cronin`s honours were all the more timely, as his father, Brian, was the Club`s President during that season. His first international jersey, won against Ireland in Dublin on 16th January 1988, was presented to the Club. In May 1993 he toured New Zealand with the British Lions.
PILKINGTON SHIELD YEAR - In recognition of these efforts the Club was again awarded the Redbridge Sports Council "Club of the Year" for 1995.
E.G. Tweedy also received Life Membership of Essex CRFC in the same year.
1996 heralded Ilford Wanderers Centenary Season. Celebrations included a Dinner/Dance at the Metropolitan Police Club, Chigwell, a Buffet Dinner/Dance at the Club House, matches against Essex and Eastern Counties (won 39-14 by IWRFC) and a Celebration Dinner at the Whitbread Brewery, Chiswell Street, London on 8th March 1996. The Dinner was attended by 294 Wanderers (including Peter Watson from Canada, Jim McClennan from New Zealand and Peter Scott from Florida)and guests. Guests at the dinner included Tony Hallett (Secretary of the RFU) and Sir Peter Yarranton, who had been present at the 75th Anniversary Dinner.