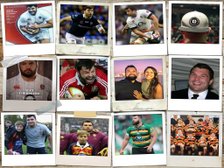 Alex Corbisiero and The Urology Foundation

As most members will know, Alex Corbisiero is the club's most illustrious product having learnt the game at King's until the age of 13 in our Mini section - you can learn more about his journey in the link below - before going on to represent London Irish, Northampton Saints, England and of course the British Lions on their victorious 2013 Australia tour.

Many will have seen that Alex has been making news in recent weeks and months, albeit not for his achievements on the pitch or in his new career as a TV presenter and rugby mentor / coach. In March this year Alex broke the news of his testicular cancer diagnosis on the Rugby Union Weekly pod hosted by another of own, BBC Rugby correspondent Chris Jones. You can read more about that here.

After spending much of the year in the US where he lives with his fiancee, US Women's 7s player Abby Gustaitis, Alex has recently returned to the UK for further treatment and has taken to social media and rugby podcasts to share details of his progress - including The Good, The Bad and The Rugby with his former England teammate James Haskell - which may be seen here.

Not satisfied with focusing on his own wellbeing, Alex has taken the opportunity to raise the profile of mens' health, specifically testicular cancer, and sales of his Team Corbs t-shirts are helping to raise funds for more research by British charity The Urology Foundation. Details of their partnership here.

His Team Corbs t-shirts with his logo on the front and TUF logo on the reverse are available via the link below.

It goes without saying, but we will anyway, that everyone at King's wishes Alex a speedy and full recovery and we will continue to keep a close eye on his progress.