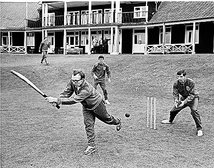 Back To Winning Ways

King’s used to play the Bank of England every season but as a Middlesex club the foundation of the league saw the Bank placed in NW London Middlesex leagues while King’s went to the SW and Surrey. One of the finest sporting facilities in London it was used by the England soccer team prior to Wembley matches including the ‘66 World Cup final. Training then was the reverse of the current cricket team who use football to warm up. The '66 boys enjoyed a game of cricket to warm-up!

Following the withdrawal of Teddington from the league King’s were looking like they might be left without a game this weekend, but having lost their last three matches the Old Boys were keen to secure a fixture in order to re-establish some confidence and keep players hands and brains sharp. The prospect of relatively local away day at Bank provided an ideal proposition.

With Teddington and Economicals both gone from the Conference North (and Old Cranleighan teetering on the edge of the abyss) the league is a little muddled. The RFU tables on englandrugby.com will show the league with the teams and results removed but for the moment the tables on pitchero (our web site) will show the league as if walkovers are still being given. If fixtures against Teddington and Economicals are dissolved then the points scorers, appearances by players and all other references to the games that were played will disappear into the ether. The tables will eventually say much the same thing!! Results at the weekend with victories for Battersea, Bec and Mayfair playing Reeds, Media and Tiffs respectively mean the league is wide open!

Back to the game. A stiff wind gave Bank an early advantage but eventually King’s broke clear not once but four times with tries from Tom Smith(twice), Pete Januszewski and Sam Hill. 22 points clear Bank scored two tries back one a penalty try following a try saving but illegal tackle.

Second half was much the same. Two more long distance tries from Pete Januswezski gave him his hattrick the second being notable for Alistair Stables’ outside break and perfectly weighted kick through for Pete to score. Bank got two more tries at the end to make the final tally 22-36.

Big weekend ahead. Everyone playing please, both teams at home.