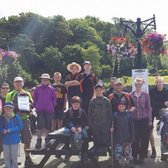 Rhinos Raise Over £1,000 For Save the Rhino International

Our Snowdon Adventure began at 10.45 on a sunny Sunday morning in early July. Despite the vociferous warnings from the landlady at our B&B that, just

Our Snowdon Adventure began at 10.45 on a sunny Sunday morning in early July. Despite the vociferous warnings from the landlady at our B&B that, just 2 weeks earlier, an U10s football team had taken over 8 hours to reach the summit and get back, we were confident that rugby players are made of tougher stuff. Our goal was 6 hours!

The team had already taken something of a hit and numbers were down on what we had hoped for. Family and work commitments had meant 2 families had to drop out at the last minute. However, first award of the tour must go to Mark B with his bicycle stunt show that resulted in a twisted knee, broken wrist and a concussion. Even Adam’s ‘never say die’ approach had to let him off on this occasion although only after the promise that he would take on the mountain when his wounds were healed. So 3 families down before we’re even in Wales! But hats off to Sadie (Funding Coordinator) and Jon (coach) who’s knees and back respectively were causing problems but they still came along and did part of the climb.

So after some mild confusion of heading off towards the wrong mountain, we were set. Onwards and upwards. The sweepstake amongst the parents was won by coach Mark P who correctly guessed that little Josh would be the first to ask ‘Are we nearly there yet?’ although as this was under 10 minutes in, we all hoped it was Josh’s dry sense of humour!

The first hour of the trip was glorious sunshine. Nothing too steep nor terrain too tough. Before we knew it we were at the Half-Way-House café. Relieved that it was open, Mandy took the opportunity to have a nice long drink, safe in the knowledge that the café had ‘public conveniences’. Half a litre of water later she was horrified to find an ‘Out of Order’ sign on the door. It was around this point that Mandy took over as official team pace-setter!

Another mile on and the confidence that had crept over us all was crushed when we saw what lay ahead. This was steep. Steep, steep, steep! And it went on and on. “Never mind” came the cry from our pace setter; “No time to lose”.

Things were now getting tough. But never mind, we still had glorious weather…….

Then the cloud arrived. This wasn’t an English cloud. This was a special Welsh cloud. Just like our landlady had promised. Day turned to night and someone turned the tap on. This wasn’t rain. We had somehow seemed to take a wrong turn into a waterfall. A few of us tried to get our waterproofs on but in reality it was futile. In the time it took to look in the rucksack you were soaked through.

After fighting our way to shelter under the mountain railway bridge, the rain stopped as quickly as it had begun. However, the cloud stayed. Despite the now chilling wind, there was no return to sunshine for the remainder of our ascent. This was a real pea-souper.

Over to coach Mark for one of his legendary motivational speeches. Out of character for Mark he has some sound advice & pulls out a couple of whistles with the instructions that we split into groups and if we get lost, stay still and blow the whistle. Was he really a boy scout when he was younger?

Plodding on through the grey, a brief break in the cloud caused an unexpected problem. Sam suddenly realised he was walking along the side of a mountain and was afraid of heights! Cue a pep talk from mom, Lisa, and what has to be the contender for teamwork award, Sullivan. Sam and Sull’ stuck together like glue for the rest of the way up, each giving the other the strength to carry on.

“Step it up everyone” – another call from our self appointed pace setter. Mandy had been speaking to folk on their way back down from the summit. The café at the top was open. And the toilets were too!

Before we knew it, our goal was in sight. Being in sight in that weather really did mean we were close. A last push and we were there. Cold, hungry, miserable but together. Everyone had made it.

Our pacesetter kindly volunteered to check out the visitors’ centre for us. 2 minutes later she returned and confirmed it was open and there was actually no rush to get back down the mountain. Much relieved, especially Mandy, we all took the opportunity to get warm, quench our thirst and get some food in our bellies.

After a leisurely ‘lunch’ we set off back down. At almost the exact point where the rain had gate crashed our party, the sky cleared and the sunshine returned. Not that we would have expected it just 1 mile earlier but the sun cream, that many dads had complained about carrying to the summit, was now being generously applied.

As we got closer to ‘base camp’ the sun got stronger and stronger. The kids had all found a second wind. The adults were mostly finding that they weren’t as young as they thought. Adam had pinched his son’s waking stick and was finding his own pace (right at the back almost out of sight of the kids!). This did have one advantage in that he didn’t have to listen to the horrible crunching sounds coming from Sadie’s knees that were giving every indication of failing at any moment.

Finally base camp was ahead of us. With the bonus of Jon being there with a case of ice cold beer! We didn’t quite make our 6 hour target but we were only a few minutes out. Proof, if it was ever needed, that rugby players are made of tougher stuff than footballers!

We were exhausted! But the day had one last surprise in store. Just across the road from base camp, the glorious mountain lake had never looked so inviting so in we went. Most stripped down to underwear before diving in. Sadie couldn’t wait and went in fully clothed!

A great day with great people for a great cause. The final figures are not in yet but, for sure, we have exceeded £1,000 raised for Save the Rhino International.

Huge thanks to everyone who sponsored us. If you haven’t already given and would like to make a donation, please visit www.JustGiving.com/RhinosDoSnowdon

Special mention to Rhino Teamwear who donated some fantastic kit, some of which was used on the day, some was sold to raise funds and some of which is still available (see BMX ace, Mark Burge)