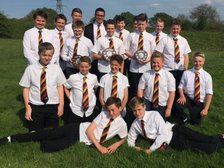 U13s end a hugely successful season with presentation, BBQ - and a rounders match which turned into a rounders rugby match!

An outstanding season for the boys which parents and coaches agree is down to the fantastic team spirit that has developed amongst the players.

Points for: LOADS
Points against: NOT MANY

Coaches' player of the season: Toby Little
The Coaches’ Player of the Season award goes to someone who adopts all of the Core Values. A team player who shows respect and discipline, sportsmanship and enjoys rugby - not just matches but training and being part of the club, the wider family that is The Rhinos.

Players' Player: Toby Mansell
This award is voted for by team mates who have seen at close quarters the hard work, character and commitment displayed on the field during matches and training and also off the field in the way you conduct yourself.

Well done to all the boys for a fabulous season and many congratulations to the three award winners.