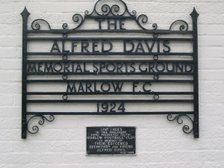 It was on November 22nd 1870 at the Compleat Angler Hotel on the banks of the Thames that Great Marlow Football Club was formed and so began the history of one of the oldest clubs in the country. In the last century the Club was a major force in the game and as one of the original entrants in the first F.A Cup competition in 1871/72 contributed a share of the £25 that bought the first trophy. In the very first year of the competition a certain Cuthbert Ottaway turned out for Marlow and just a year later he was to captain the national side against Scotland in the first ever officially recognised international match.

Marlow have the unique distinction of being the only club to have applied for entry to every competition since its inception although they were unable to compete once in the 1910/11 season. In 1882 they reached the semi-finals where they lost out to eventual winners Old Etonians 0-5 at the Oval. Two Amateur Cup semi-finals and a host of Berks & Bucks Senior Cup wins were among many honours won in this golden age. In 1894 Marlow rejected the opportunity to join the newly-formed Southern League in order to retain their amateur status and allowed Tottenham Hotspur to begin their climb to the top flight by taking their place

The Club's ground until 1919 was Crown Meadow, now the Riley Recreational Ground. An enforced move to the Star Meadow (which was unfenced) and the worsening financial situation resulted in the need to play in a more local competition than the Great Western Suburban League and Marlow joined the Reading and District League. This was a dark period for the Club and worse was to come when the Club's long-serving Honorary Secretary Alfred Davis, who had held office at the Club since 1891, died in 1924. It was decided that a fitting memorial to him would be to provide a permanent home for Marlow F.C. An appeal proved to be very successful and the “Alfred Davis Memorial Ground” saw its first game in 1928. The picturesque grandstand dates from 1930’s and followed the establishment of an Association who issued Share Certificates in connection with a Building Fund and was built to celebrate the Club's revival and the Spartan League Division Two championship.

Apart from a war-time break Marlow continued in the Spartan League until 1965 when entry was gained to the Athenian League Division Two. Promotion to Division One was secured in season 1970/71. Here Marlow remained until 1984 when they joined the Isthmian League. Having finished bottom of Division Two in 1985 the appointment of Mike Keen as Manager heralded a rapid rise in status. Promotion to Division One came the very next season and then after just one season in Division One the championship was won after a two horse race with Grays Athletic and along with it promotion to the Premier Division.

Here Marlow found things much tougher and Christmas arrived without a win and from a position at the foot of the table relegation looking very likely. However a late season Houdini act saw them escape and secure their new-found status. When Keen left his assistant Dave Russell took over and brought in Laurie Craker as Coach. Under them good times returned and the Berks & Bucks Senior Cup was won for the first time that century with a victory over local rivals Wycombe Wanderers and the F.A Cup First Round was reached, also for the first time that century, with an away tie at West Bromwich Albion the reward. Season 1992/93 saw even more F.A Cup success with progression this time to the Third Round and a tie with Tottenham Hotspur that was switched to White Hart Lane where almost 27000 saw the Blues give a very creditable performance. The Diadora (Isthmian) League Cup was won to finish the season on a high note by beating Molesey.

1993/94 must rate as the most successful ever with Marlow again reaching the First Round of the F.A Cup where a 0-2 home defeat against Plymouth Argyle was featured on T.V, while in the league a highest-ever position of third was achieved. The Berks & Bucks Senior Cup was won again with a 1-0 win over local rivals Chesham Utd. to round off a highly memorable season.

At the end of that season Russell and Craker left for Slough Town and took several players with them. A new squad and slow start left a lot to do in the league and a brave late fight failed to see the Blues avoid relegation. In the F.A Cup things were very different. The First Round saw Division Two table-toppers Oxford Utd. defeated 2-0 at Oak Tree Road and the Blues became the first winners of the Littlewoods Pools' Giant Killers award. Another home victory followed over Trophy holder's Woking to secure a place in the Third Round Proper once again and a trip to Swindon Town, who had been in the Premier League the season before, where the home side were grateful to progress by a 2-0 scoreline.

Season 1995/96 saw a great finish in the league in eighth spot but the following one got off to a terrible start from which the Club was never able to recover – and despite victories over virtually all the top sides, relegation was confirmed on the last day of the season. Russell returned for the following season and with him high hopes but the season proved to be one of under-achievement and a new team of Graham Pritchard and Derek Sweetman took over for 1998/99 and provided a period of stability which saw finishes in mid-table. Following the departure of Pritchard just before season 2001/02 Sweetman took over the reins and his first game in charge saw the capture of the Associate Members Trophy in a final held over from the previous season. The side finished the season in 9th position in the league – the highest for some time – before restructuring saw them move from Division Two to the newly-formed Division One North for season 2002/03 where an 11th place finish was achieved. In the F.A Trophy they progressed to the Third Round before going out at Dagenham & Redbridge.

Marlow again found themselves in new surroundings the following season having transferred to Division One South and although inconsistent form saw them finish 16th in the league they again had an excellent run in the F.A Trophy which took them to the Fourth Round for the first time in their history. Several notable victories saw them through before a strong Tamworth outfit ended their run at Oak Tree Road.

The reorganization of the non-league game saw them in different surroundings for the fourth time in four seasons with entry into The Southern League where they competed in the Western Division for season 2004/05 and finished in 13th spot. Kevin Stone had moved into the manager’s seat towards the end of the season and enjoyed a great run. 2005/06 and in the same league and in more familiar surroundings seemed to suit the side and for most of the season they hovered around the play-off positions and eventually finished in 6th spot. A play-off spot was confirmed on the final day of the season and although a 1-2 defeat at Brackley Town followed the Club were pleased with the progress. Season 2006/07 in the South & West Division saw a successful run of results promise another play-off berth but a last day defeat at Winchester City saw them fall just short whilst season 2007/08 was a little more disappointing with some very good results failing to offset a poor run around February/March with a final finish just outside the play-offs resulting.

Season 2008/09 saw the Club moved yet again into the Midland Division and another inconsistent season followed finishing with a defeat to Windsor & Eton in the final of the Berks & Bucks Senior Cup at M.K Dons stadium.

The following two seasons saw some good results against the top sides but indifferent ones against the lower teams and ended with mid-table finishes even though a bright start in 2010/11 saw them briefly at the top of the table. 2011/12 did not start at all badly but soon developed into one where victories were very hard to come by and following a string of poor results long-standing manager Stone left just after Christmas. Assistant Steve Croxford took over and although performances and results improved towards the end it was not enough to avoid relegation.

Season 2012/13 found Marlow in new surroundings in the Uhlsport Hellenic League with a new management team headed by Mark Bartley eager to recapture some of the glories of the past and this they did, winning the league championship by a 16 point margin and scoring 123 goals in 36 games to regain their previous status in the Southern League where 2013/14 season saw them consolidate their newly-regained status followed with finishes in and 17th and 11th positions respectively.

For 2015/16 Marlow found themselves moved once again – to the South & West division – which again meant increased travelling and associated costs, the loss of some key players and being deprived of several local derbies making life much more difficult than it really needed to be. In the circumstances a mid-table finish was achieved and a return to the Central Division for this season looks to be more appealing.

A return to the Central Division for 2016/17 aided a finish in 4th place (on goal difference) and achieved a play-off place, with third-placed Barton Rovers running out 2-0 victors at their ground.

Season 2017/18 ended with a mid-table finish followed by a return to the Isthmian League after a lengthy absence to take a place in the newly-formed South-Central division with a resultant reduction in travelling which is most welcome.