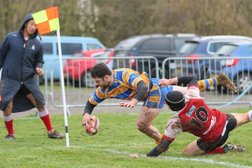 This was a disappointing game for OLs after the form of recent matches and it took only three minutes for the home attack to create good forward drives to cross the OLs goal line for a converted try. OLs came back into the game and honours were even for the next 15 minutes. From a good positional set scrum the ball was fed quickly along the OLs three-quarters to wing Liam Wellings who crossed for a well taken try making the score 7 - 5.
The try went unconverted but the reduced deficit lasted only four minutes before another forward driven passage of play by the Welsh produced a second converted try, the score moving to 14 - 5. The game evened out again but it was Coventry Welsh that were dictating play and OLs were seldom off the defensive back foot.
The Home side offensive was further rewarded with a third first half converted try before an OLs infringement in mid field ended with OLs second row Joe Tallamini being shown a red card by the match official following an altercation.
From this point on the game went downhill for OLs, nevertheless fielding only 14 men against a heavier Coventry Welsh 15 half time was reached with no further scores at 21 - 5.
The second half was a battle for OLs and was played primarily holding out the Welsh whose basic rugby game plan of keeping the ball in possession put them in complete control of the game and it was only sustained defence that kept the scoring down. The next score came from a long range penalty after seven minutes of the second half and saw Coventry Welsh increase the lead to 24 - 5
The game continued with the home side in control and it was only sustained solid defence by OLs that kept the home side scoring down to two further tries, one of which was converted to give a final score of 36 points to 5.
OLs next opponents are Ledbury next Saturday at The Crofts with a 2.15 pm kick off.