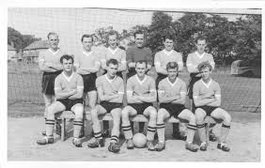 Although there has been previous football clubs in the village, the present club was formed in 1959. The club initially played their early games in the Stowmarket and District league and the Eye and District league. Some of the club's founder members remain on the committee to this day.

The first pitch was at Hill Farm, and visiting teams from the more urban areas were often unwilling to get their knees dirty as the previous occupants were a herd of dairy cows!

In the clubs fifth season, in 1963, the club joined the Ipswich & District league, now the Suffolk and Ipswich league, starting in the fourth division. In those days the league had two sections in that division, with the winners of each section playing each other for the championship. When the league adopted a linear set up in 1971, the club were in the first division. In 1981 the club won division one and the following season took there place in senior football for the first time.
In 2002/03 season the club were winners of the Omnico Cup, possibly the third highest competition in the County.

The club moved to their present home in 1967, and changing rooms were non- existent. The club then purchased a pre-fab building which they erected and converted into dressing rooms. After the club gained senior status a club house was built by voluntary labour. In 1996 new dressing rooms and extension to the club house was completed to provide some of the best facilities in the area.