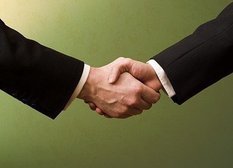 Ossett teams United on their vision for the future

These are really exciting times and whilst there is still a lot of work to be done I am confident that this is the start of something really special for Ossett.
James Rogers, Chairman of Ossett Town AFC

Following the announcement last week that Ossett Town AFC and Ossett Albion FC are to merge, subject to FA and league approval, we can today answer many questions that fans, supporters and interested parties have been asking over the course of the last week.

In recognition that the merger is truly a joining of equals the new club will be called Ossett United – we realise that many of you guessed that this would be the case and it is heartening that many people suggested this as a fitting name for the new club.

We all come together with a clear vision for the future - to provide the highest level of football possible for Ossett,

We can also confirm that Ingfield, the current home of Ossett Town will become the main home base for Ossett United with the first team playing their home games on what will become a supreme grass playing surface. We will invest in the facilities at Ingfield to make them fit for a team ambitious for promotion to higher levels and create better facilities for our existing and new fan base as well as for the people of Ossett and the surrounding areas.

We will utilise Dimplewells, the current home of Ossett Albion, as our key training, coaching and playing facility supporting our reserves/U21s, U19s and NPL Academy teams, as well as for junior and ladies use. Our plan is to ultimately replace the grass pitch at Dimplewells with a 3G playing surface to support our ambitions.

We are currently developing our new brand and crest and news on these will follow in the coming weeks. Our base branding colour will be blue so again watch this space for an announcement on our new kit.

We’re keen to ensure that fans and supporters of Ossett United feel part of the journey and our Chief Executive Phil Smith is working hard to develop a supporters club that ensures this will happen as well as looking to bring many other benefits.

As a community run club we will also be working with all of our current volunteers, who are in reality the lifeblood of our clubs, to ensure that they can continue to be involved and play a significant role as we move forward.

John Chidlaw, Chairman of Ossett Albion said: “The response from fans, supporters and interested parties has been fantastic over the course of the last few days and we are making significant progress very quickly. I am proud and excited to be involved in this development and I can’t wait for Ossett United to become a reality”.