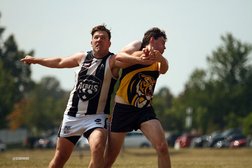 Rebels kick of the season with a trip to the Hammer

The Rebels kicked off season 2022 with a trip down the QEW for a highly anticipated game with the Wildcats. In what was a fantastic result for the league post pandemic, both team were able to field full squads and play 18 a side.

The Rebels are full of new faces this season, and there were 9 players playing their 1st to 3rd games. In contrast the Cats are extremely experienced and also added a number of Australians in the off season.

The game started with a flurry, both teams looking to get on the board early. The Cats applied the early scoreboard pressure and moved the ball through the Rebels with some strong running. Big man Duffy was doing a power of work down back early, with Jordy cleaning up a lot of the footy as well.

The Rebels lost a couple due to injury early in the second which caused a bit if a reshuffle. Alex and Udai were doing all they could in the midfield and were making it tough on the Cats and Kid in his first game as Captain was not taking a backward step. Don't have the quarter by quarter margins but the Rebels were well down at the half.

With some shifting of the magnets and a renewed focus on the contest, the boys really stepped up in the second half. Wozza was immense across half back and Jello was showing a bit in his first time in the ruck. The Muscat brothers were playing some inspired footy and will only get better as the season goes on. The final score was 90 point loss, but the boys fought it out until the end and were simply out gunned by a team full of accents.