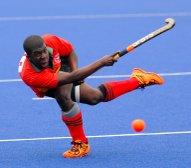 Despite Thurrock being 3rd from bottom, Redbridge knew it wasn't going to be an easy game... A cold morning met us and after a long warm up we were ready to go.

The first half went by with control from Redbridge; Aidie, Josh and Andy bossing the midfield. An unfortunate kick of the ball from a Thurrock player was unnoticed as he rounded Charlie but a brave goal line block from the tank at the back Mikey made sure the opposition didn't go ahead. After some good pressure Marc scored his trademark spinning goal past the keeper and Redbridge took a well deserved lead.

More pressure lead to a short corner which Aidie dispatched with ease. Just on the brink of half time another short lead to some confusion as Aidie decided to drag flick the ball above the backboard which was, in the umpires "rules", deemed to be illegal... Redbridge held their breath awaiting the decision and to everyone's amazement a goal was given!!

In the second half chaos erupted as poor passing and play from Redbridge lead to Thurrock having more of the ball. An interesting attempted squarial from JP nearly resulted in hitting a Thurrock spectator, but as play continued an inspired first goal for the 1st XI from Aneel was scored- A beautiful pass from Happy was skillfully deflected at such pace the keeper had no chance to even see the ball. Some debate from the umpires as to whether the shot of such class was allowed, the goal was eventually awarded!

For the most part the strong defensive line up of Elliot, Mike, Coolio and JP held firm even with Elliot deciding he wanted to hit the ball at a Thurrock players head. A lapse of concentration caused Redbridge to concede. but before long Marc thought it was time to score again and the game ended 5-1.