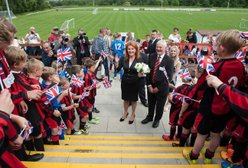 A short history of our club……

Shelley Football Club was established in 1903 and was originally located on Back Lane, opposite the village hall in Shelley.

In the late 1950’s the club relocated to Westerly Lane in Shelley which heralded a period of success including a double in 1960/61 winning both Huddersfield & District Division 3 title and the Groom Cup.

This success wasn’t maintained and the club folded in 1972.

In 1980 the club was reformed by Ash Berry, Paul Hirst and Steven Shephard and in 2000 moved to Skelmanthorpe Rec.

The club slowly grew and with the support of the Leslie Sports Foundation and the Football Foundation, moved to Storthes Hall in 2011.

After several years of hard work, the Storthes Hall facility was formally opened by Sarah, Duchess of York in June 2015.

Since the move to Storthes Hall Park (also known as the Stafflex Arena) the Club has enjoyed several promotions, from the Huddersfield & District League, through the West Yorkshire Association League Divisions 2,1 and Premier and into the North West Counties Football League.

After two successful seasons in the NWCFL Division 1, and with the team sitting in third place with a handful of games remaining, and on track for promotion to the NWCFL Premier Division, the season was cut short and the competition terminated, due to the Covid-19 global pandemic, which had a devastating impact on the global economy, and society in general.