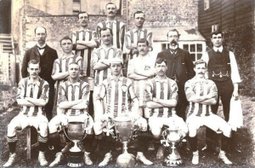 Shoreham FC was founded in 1892 and gained its first major honour in 1902, winning the Sussex Senior Cup, something that was repeated four years later.   In 1920 Shoreham became founder members of the Sussex County League, only to resign seven years later after picking up just five points over the entire season and finishing bottom of the twelve club League.
In 1932 however, the club rejoined and ended the 1934/35 season as runners-up to Horsham.   After a difficult period during the 1940s, Shoreham took the County League title for the first time in 1951/52, and retained it the following year. In 1960/61 Shoreham were relegated, but made an immediate return as Division Two champions the next season.
The Blues were relegated once more in 1966/67 to Division Two, where they spent six seasons before finishing as runners-up to Portfield in 1972/73. Unfortunately, they survived only a season before being relegated again. True to form, Shoreham bounced back: winning the Division Two title in 1976/77 and adding the Division One championship in 1977/78.

Over the past twenty years, Shoreham have continued to alternate between the top two divisions of the County League, with frequent relegation and promotion seasons at Middle Road.
The best seasons in recent years came in the mid-1990s, when they twice finshed in the top four of Divison One, and won the League Cup in 1996.   Shoreham were promoted back to Division One as runners-up in 2001/02, following relegation two seasons earlier. However, a now familiar pattern followed as, after narrowly avoiding relegation in 2002/03, the club finished bottom in 2003/04 and returned to Division Two.
But in 2004/05 season Shoreham finish third in Division 2 to gain promotion at the first time of asking so for joint-managers Fred Proto and Jason Rutherford to gain promotion in their first season in charge is an extraordinary effort.

Given our previous history of moving back and forth between the divisions, everyone at the club were very pleased to consolidate in 2005/06. The season saw Middle Road continue to be favoured as a neutral venue for cup ties, and the Musselmen were to collect some silverware of their own: defeating Whitehawk 2-1 in the Final of the John O’Hara League Challenge Cup.

More historical information- Today’s Shoreham Football Club was founded in 1892 playing competitive matches in the West Sussex Football League as from 1896, the Sussex Senior Challenge Cup competition that had been run since 1882 and the Royal Ulster Rifles Charity Cup (originally the Royal Irish Rifles Challenge Cup) a competition that was begun in 1897.
SCFL Premier League Champions 2016-2017 and were promoted to teh Bostik South League.