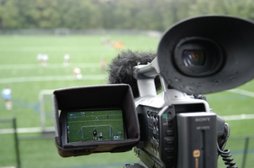 Our club has a great tradition and following and this is expressed by TV coverage, weekly press coverage, videos plus lots more.
To see our exposure coverage click on the links below.

Published on 20 July 2016
Pre-season chat with Chairman
Click here to hear his thoughts.

Published on 12 July 2016
A great day was had by all with TeamPro filming the excellent team selection system we will be using this season:
Click here to see how the day panned out.

Published on 20 Oct 2015
What is it like to own your own football club? Stuart Slaney , of Shoreham FC, joins Mike Mendoza in the Latest TV studio to talk about running your own team.
Click here to see full interview

Published on 1 Sep 2015
The players, supporters and officials of Shoreham FC held a minute's silence ahead of their FA Cup clash with Horley in memory of the victims of the Shoreham Airshow crash.
Click here to view