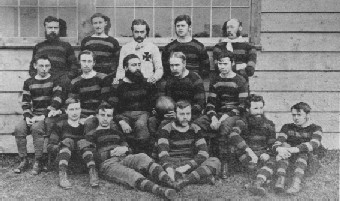 The central bearded figure is thought to be Algernon Dewhurst.
The Club played in Maroon and Amber Hooped Jerseys until 1889 when the present colour
Cardinal Red was Adopted 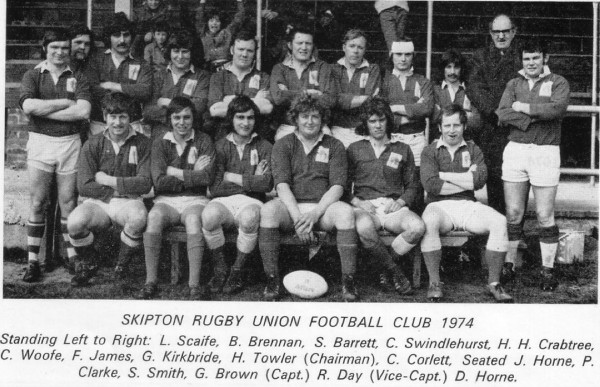 The town of Skipton in Craven is described in the local Almanac of the 1780's as "The metropolis of the far farmed, agricultural, manufacturing and mining district of Craven". Favourably situated for trade on the borders of the counties of Yorkshire and Lancashire, with a population growing rapidly from 8,600 in 1871 to over 12,000 in 1883.

During the summer of 1874 a football club was founded in the town. Sir Matthew Wilson Baronet, M.P. for the northern division of the West riding consented to occupy the position of President. A committee of gentlemen had been elected who would go "heart and soul into the new exciting game". It seems clear that football had been played in the district before this date, games probably being arranged between sides from the local mills and quarries, but up to this time there had been no unified effort. The club was to be known as Skipton Football Club, and matches were to be played according to the Rugby rules of the game.

The popularity of the game had been growing throughout the north of England over the previous 10 years, prior to that it had only been played on any organised basis in public schools, and as such enjoyed almost solely by the aristocracy. The game was considered "healthy, exciting and mirth provoking" and in it "you may pick the ball up, wedge it tightly under your arm, put your head down and charge, if you can into your opponents goal". It was a game in which "you can expect to be knocked this way and that, tripped up and hacked across the shins, and other rough liberties taken with your trunk and limbs".

The Rugby Football union had been formed three years earlier in 1871 and a set of rules had been formulated to bring order and uniformity to the game. The maximum number of players was set at 20, the actual numbers taking part apparently being a matter to be decided between the rival Captains before the game. There was not yet a referee, but two umpires, presumably one from each side who decided on any disputes, in consultation with the Captains.

Skipton's first fixture was against an Ilkley side at Ilkley on 7th November 1874, and though Skipton lost the game, their play drew the following comment from the Press: - "Considering this was the first match ever played by a Skipton team, we think the result may be considered highly satisfactory". Eleven players took the field for Skipton, being captained by A. Sidgewick. Two other players played part of the game for Skipton as substitutes.
Other fixtures during the first season were played against Leeds Grammar School, Burnley Rovers, Bradford and Otley. Each team played twice, a home and an away arrangement, all being within reasonable travelling distance of Skipton. The team had mixed fortunes loosing against Leeds Grammar School, Bradford and Ilkley, and winning against Burnley Rovers. Comment about the teams play was encouraging, even in the matches they lost. The return fixture with Ilkley was scheduled to take place at Skipton on the 6th of February 1875, was unfortunately cancelled, this was apparently a last minute cancellation on the part of the Ilkley team. The notification did not however come to light until the time for kick off, by which time several supporters had gathered, and were doomed to disappointment.

One of the matches against Otley at Skipton "ended abruptly due to the unfairness of the visitors, who being over anxious for victory, did not conform to the rules", as the Craven Herald reported the matter.
During the game one of the Otley players "aimed a deliberate kick" at one of the Skipton players. It was not clear whether the kick landed, but the fact that it had been aimed was sufficient for the Skipton players, who refused to continue the game, which ended in confusion, the angry crowd apparently following the Otley team back to the Hotel where the match was drawn in favour of Otley. The manner of which this game ended was not unusual at the time, the game still in it's infancy, very rough and ready, and lacking in the independent control of a referee.

Very few games were played in the years immediately following the founding of the club, there is a reference in 1877 to the Skipton Football Club only playing one game, but in that year a Skipton Juniors Club was founded. It is thought that the two clubs amalgamated in 1879, for there is no reference to the Skipton Junior Club after this date.
Up to 1878 used a field between the railway line and Carleton New Road, which was reached by a level crossing over the railway line. In that year the Club secured the use of a field at Sandylands on the opposite side of Carleton New Road. Sandylands was a large tract of land between Carleton new road and the river Aire and was part of the Skipton Castle Estate, the Club presumably paying rent for the use of it. The name of the Club headquarters implies the land was very sandy and consequently well drained. It is also flat, being close to the river, and also very close to the railway station, an important consideration over a hundred and twenty five years ago, railways being virtually the only form of transport.

The game had become well established in the town by the early 1880's and proved popular, large numbers of spectators attending for home matches. A tent was erected alongside the field to accommodate ladies.

Most of the players in the early years appear to have been the sons of prominent families in the town. The Club's first Captain, A. Sidgwick was the son of the family, which leased High Mill, and J.P. Drury was also connected with that mill. The Dewhurst brothers, Algernon and Lionel were sons of the owner of the largest mill in the town, John Bonny Dewhurst, who was patron of the Club for many years. Three sons of the Rev. P.C. Kidd, former rector of Skipton, played in the first season, one of them H. Kidd being Secretary from 1874 to 1878. F.E. Bracewell was the son of a Gargrave firm of manufacturers, and R.I. Jefferson was Manager of the Craven Bank. Other members of the Dewhurst family were later connected with the Club, Edgar being Captain in 1888, whilst Algernon and Lionel continued to support the Club as Vice Presidents. This gives rise to the thought that the information of the club may well have been inspired by the sons of local businessmen, who probably played the game whilst at Public School.

The playing record of the club improved steadily, and the membership grew, being in the region of 50 by the early 1800's. A second team was formed in 1882, and from 1885 a third team was occasionally fielded. Originally the team played in maroon and amber striped jerseys, up to 1889, when the present colour Cardinal Red was adopted. Towards the close of the 1880's, the clubs first grandstand was erected, evidence of the numbers of spectators who supported the club. The membership had grown to around 120 by this time, and the clubs finances for that period read as follows: -
Subscriptions £22-18s-0d
"Gate" Receipts £67-1s-8d
Travelling Expenses £39-2s-4d

The main source of income i.e. "Gate" money is further evidence of the popularity of the game in the town.

About the same time as the Skipton Club was formed, or shortly afterwards, the game of rugby football was adopted at Ermysted's Grammar School, Skipton. The earliest record of a match between the club and the school is on 26th March 1881 when the School team met the Skipton Club's second team. This was the first of many such matches, and the start of a close relationship between the two. Edward Tomson Hartley, Headmaster of the School, played for the Skipton Club and in 1882 was elected its President, holding that post for the next ten years, during which several other members of his staff became associated with the Club. 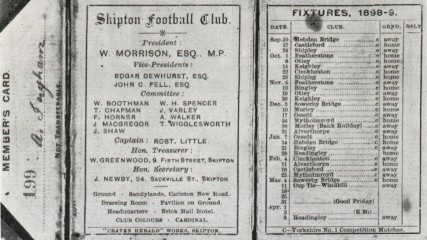 Dependent on the distance involved, many away matches took up the whole of Saturday, the journey being made by train and on foot. Quite often, some of the players would not be able to finish work on Saturday in time to catch the train, and very often, the team which travelled away consisted of many second team players. The players did not carry their own individual jerseys, shorts and boots to the game, these being the responsibility of the 'Skip-Man'. The name is derived from the large wicker basket, or 'Skip' in which the gear was carried, the term will be familiar to anyone who has worked in a mill. The Skip was mounted on wheels, and it was the sole responsibility of the Skip man to ensure that it was at the appropriate field on time. It was also his responsibility to have the shorts and jerseys washed, and the players boots "properly greased". The usual practical jokes were played, and the Skip got "lost" on more than one occasion, but apparently always turned up on time. After the match, the team would partake of the usual liquid refreshment during the evening, and arrive back in Skipton on the last train.

Most Rugby Clubs have at some time or other been "on tour", the first occasion on which the Skipton Club did this was back in the 1890s. The Club visited various places, one year staying at Leeds, and playing Normanton and Leeds Newtown, the year after the Club stayed at Barrow in Furness, and played Millom and Dalton in Furness. The Club went "on tour2 to Wales in 1893, staying at Cardiff, and playing Neath and Penywaig. In the game against Neath, reported J. Newby, one of the team,"We made a good show for 20 minutes, and then the crowd sang "Land of My Fathers" , and that "put the tin hat on it" and we lost by 13 points. Other teams played "on tour" were Kendal Hornets, Ulverston, West Hartlepool, South Shields, Westoe, and Northampton.
Changing accommodation for matches played at Skipton varied from time to time. The Club's headquarters was at the Craven Hotel, in Craven Street, and changing facilities were made available there, leaving a half mile walk to the field. In 1889 the headquarters moved to the Old George Hotel, in the High Street and changing was done in a pavilion on the ground. This would probably be a wooden shed alongside the field, but it is also understood that the cricket pavilion on the next field was used at one time. Bathing facilities were two tin baths, and water was drawn from a hand pump at the corner of the field. Later there was the luxury of hot water from a gas boiler.

The game was still very robust, and often relatively serious injuries were suffered by players, but despite this, and the often primitive changing and bathing accommodation, there was never any shortage of players, and the game of rugby football was fast becoming a popular way of spending Saturday afternoon whether as a player or spectator. 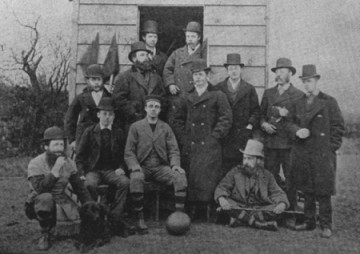 SKIPTON FOOTBALL CLUB, CIRCA 1874
Perhaps this was the first Clubhouse, probably used as a makeshift changing room and store.