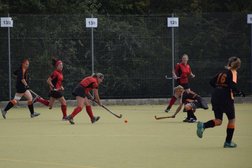 How are they getting on?
Well they have won 7 of 10 and lost just once and are 2nd in the league with just 3 to play - and are back in action after a half term break this weekend

So can they get top spot?
Well.. trailing top placed Eastbourne Cygnets by 8 points with 3 to go so it is going to be tight!!!

Hang on we have a game in hand?
Well yes this is bizarre, Burgess Hill 5's could not field a team near the start of the season against Wick however in the Ladies rules state the team that don't play get a 2 point deduction. This seems a bit unfair on our ladies as they have no chance to win the 3 points which could be crucial?

Weird?
Tell me about it, I know our ladies are looking into it and hoping to get fixture rearranged, though don't quote me on anything as I don't understand Ladies league rules

Ok so how do we go up?
Well it may be top 2 are promoted, in which case will need to secure 2nd place and hope for the best - or win the last 3 and hope the Cygnets lose 3 to be league winners. (depending on this outstanding fixture!?) It's all a bit up in the air, but they need to secure at least 2nd place to give themselves best chance

What's the run in like?
Tough, they face 3rd placed Burgess Hill 4's next Saturday who they are only 1 point ahead of, then a trip to Brighton in 4th before a final game at home vs Eastbourne Cygnets

What about the others?
It's a league organizers dream really all the top 4 play eachother in the run in but Eastbourne will feel confident with home games vs Burgess Hill and Brighton next week.

But they can outscore all them surely?!
Mel has out scored a couple of the club teams herself this season with 32 goals, so let's hope she is not inured/away for the next 3 weeks! Sophie Chandler has done well too with 18

Can I get involved?
I'm sure the ladies would appreciate some support in the early morning games at Blatch on 5th March and home vs Cygnets on March 12th. Win or draw in Burgess Hill this week and will just need to win these 2 to secure runners up place