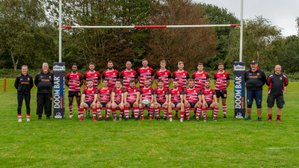 Another Good Workout Against Penryn

On a glorious Cornish summer evening on the banks of the Fal, St Austell RFC wrapped up their preseason games with a 34-17 win at Penryn. The coaching team continued with their strategy of rotation to ensure as many players as possible gained valuable playing time ahead of what will be a long hard season. The fact the Saints made it another win to set alongside successes against Camborne (28-17) and Wadebridge Camels (17-12) made it all the more satisfying ahead of the return of competitive rugby after 18 months.

The Saints got off to an electric start stretching the home side down both flanks before Frazer Nottle dived in at the corner (0-5). The Borough hit back immediately when quick thinking at a penalty saw them “tap and go” to break the Saints defensive line. Swift hands and hard running through a disorganised Saints defence saw the home side rewarded with a converted try (7-5). The whirlwind opening continued with the Saints again having success down the wings with the irrepressible Dan Tyrrell cutting through for a fine try (7-10). After a breathless opening eight minutes the game settled down into a steadier pattern with the Saints forwards starting to gain the edge and Penryn proving to be threatening on the counter attack. On the half hour mark, a Saints driving maul thundered forward for 15m only for desperate defence to force a collapse. With advantage being played, the Tregorrick pack continue to pound the line until lock Mark Vian finally made the breach (7-15). Just before half time Penryn again showed their alertness with another quickly run penalty following Saints indiscipline at the breakdown. The Borough backs and loose forwards are a potent force in broken field, and they finished the half with another well-worked try (12-15).

The Saints made a strong start to the second half with a series of forward drives providing the platform for fly-half Matt Shepherd to nip through a gap for a converted try (12-22). The home side again provided a swift response to exploit some uncharacteristic flat-footed tackling from the Saints (17-22). In truth this was as good as it got for the Borough in the second period, with the Saints cutting out the silly penalties that littered the first period they proceeded to dominate possession and territory. Centre Ben Plummer scored the try of the game after some neat interplay with Matt Shepherd (17-29). More forward pressure saw Matt Shepherd gather his own chip kick to score the Saints’ sixth and final try to finish the game 17-34.

Both sides will have gained a lot from this run out and the Borough look well equipped for a good season in the West Counties West. Saints now have a well-earned weekend off ahead of the final week’s training. The return to South West One West start with a relatively short trip to Devonport Services on 4th September 2021 (KO 3pm).