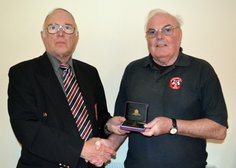 In July Jim was honoured by the Liverpool County FA for 35 years’ service to St Helens Town AFC and during the presentation it was realised that his playing career and association with the game before he 'joined' Town could also be taken into consideration for the 50 year FA award.

Jim’s ‘official’ association with St Helens Town goes back to 1979-80 when he joined the club’s committee spending much of his first decade as Press Officer and Programme Editor.

Born and bred in Sutton, Jim’s dad George used to bring him to Hoghton Road as a toddler in the late forties and early fifties when his first ‘Town’ heroes were Harry McCann and Jackie McGuirk.

Jim’s own football pedigree began at school starting close to Hoghton Road at Sutton C of E School before moving up to Robins Lane Secondary Modern in 1958 and all during that time his Saturday’s were spent travelling up and down Lancashire on Jack Glover’s old coach, supporting the Town.

Jim’s post school years saw his own playing career develop in the Saturday morning ‘church league’ of the day, and he represented both New Street Methodists and All Saints until the latter changed its name in 1963 to join the St Helens Combination, as Sutton Parish. Jim remained with them until their demise in 1969.

Naturally this affected Jim’s following of Town but he watched whenever he could and particularly remembers leaving Hoghton Road on a fleet of buses for Lancashire Junior Cup at Springfield Park to meet Wigan Athletic (then of the Cheshire League).

Jim’s playing days continued in the ‘Comb’ when in 1969 he joined the newly formed BICC Burndy, Parr where he stayed for the rest of his career and at Burndy he eventually became Secretary. One particular co-incidence at the time was that he found himself on the opposing side to future Town boss Alan Aspinall when the two clubs met at Hoghton Road when Alan’s Birchley St Mary’s team met Jim’s side in the 1975 Rainford Potteries Cup final on Easter Monday – Jim’s team won 4-2 in front of the biggest crowd of the decade at Hoghton Road. 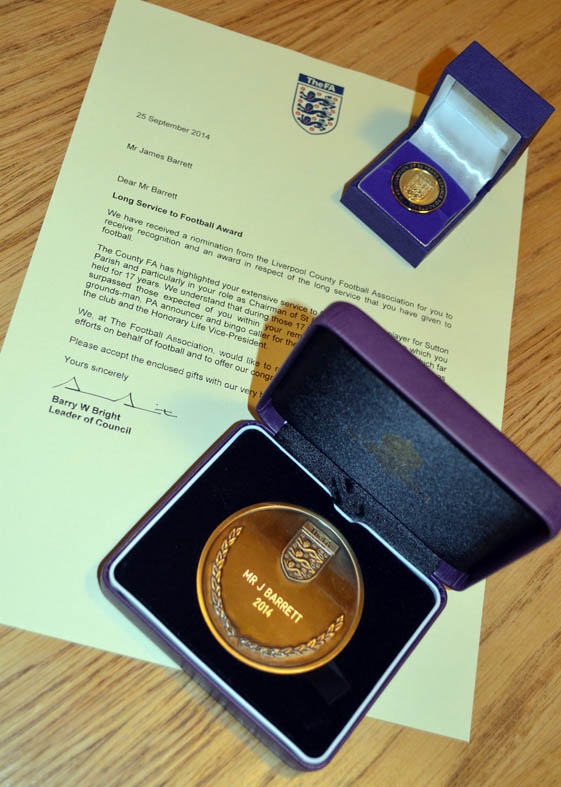 In March 1990 saw Jim elected the club Chairman, a position he held until he stepped down seventeen years later – the longest serving custodian in the club's history. The ‘title’ was always regarded as a huge honour by Jim but he continued with many of his ‘duties’ at the club. – grounds-man, PA announcer, and bingo caller in club’s Hoghton Road social club, as well as resurrecting the club’s match programme and spells as treasurer and secretary.

Having been part of the club’s remarkable FA Vase run and eventual Wembley victory back in 1987 Jim saw Town lose two cup finals in the 1990s – Burscough in the NWCFL Floodlit Trophy and Rossendale United at Bury’s Gigg Lane both by a single goal.