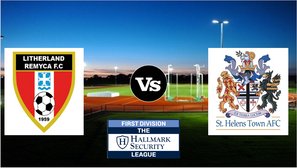 Litherland REMYCA vs St Helens Town: The Build Up

After Town finally registered some points with their 1st win of the season against Oswestry Town, they will look to kick on against Litherland REMYCA on Wednesday at Litherland Sports Park. However, this will be a tough task against an unbeaten Remy side that are only behind Silsden in the league standings. The side from Liverpool only just missed out on promotion last season as they were defeated by City of Liverpool in the play-off final, and are already on course for redemption this campaign. The Oswestry victory lifted Town to 20th, but with games in hand over teams around them such as Daisy Hill and Holker. St Helens will also take positives from the fact they won this fixture last season, as they were 2-1 victors in August last year.

Most Goals for St Helens Town in Fixture:
Andy Gillespie (2)