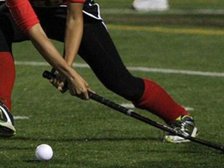 A 10.30 start for our match this morning saw the ladies 3 with a strong team and the luxury of 3 subs again!

The game started off very evenly and both teams had an equal amount of play with some great pressure on both goals right from the off. Despite some solid defending of a number of short corner the Pudsey ladies were awarded a penalty flick which despite Rikke’s best efforts resulted in them going ahead. 0-1 Pudsey continued to dominate for the next 10 minutes or so and our defenders worked hard to keep the goals out. Finally the tide turned and Thirsk began to put together some great passing play from out of mid-field to the forwards forcing the Pudsey defenders to take evasive action. A goal finally came to Thirsk from a short corner and was converted by Jo. 1-1. Thirsk continued to be the stronger side however just before the half time whistle Pudsey took a chance and scored against the run of play. 1-2 at half time.
In what proved to be a very evenly matched second half both sides had a number of chances and short corner decisions given which Pudsey eventually converted to make the score 1-3. Jo and Bev had a great link up of passes to give Jo had a further chance of goal which was just cleared by the tip of the goalies foot. Despite our best efforts the final score was a 1-3 loss to Thirsk.
7 nominees for player of the match showed just how much effort was put in by all but the overall winner was Megan.
Share via
FacebookTwitter
https://www.thirskhockeyclub.c
Recent news