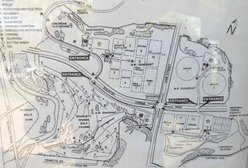 The Dragons play their home games at EGLINTON FLATS. Parking is available off Emmett Avenue. The entrance is on Eglinton Avenue, west of Jane Street.
Field status is found here in case of poor weather.

Junior training also takes place at Eglinton Flats (Field 8). The Under-14, Under-16 and Under-18 teams train on TUESDAY & THURSDAY nights, starting at 6:00pm, beginning after the May long-weekend.

Take the Bloor-Danforth subway to Jane Station. From there either take the #195 or #35 Bus to Eglinton Ave. (should be about a 15 minute ride). At Eglinton Ave you will be let off on the North East Corner, cross at the lights to the North West Corner and walk down the path into the rugby playing fields area. You may need a bus transfer if you don’t have a metropass.

The City of Toronto may close the Eglinton Flats sports fields when field conditions are poor. In this event, we will practice at the public park near the children's playground on Emmett Ave, about 200 metres west of the sports field parking lot.

Layout of fields at Eglinton Flats