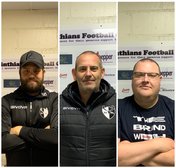 The new 2020/21 Management Team has been announced!

The Board of Tring Corinthians are delighted to announce that Jamie Roberts and Andy Hockley has been appointed as joint-managers of the Football Club, with immediate effect.

Joining the former Risborough Rangers Development management team will be Richard Kyson who comes onboard as a DOF for the football club. Richard will oversee the football operations and recruitment.

Chairman Gary Mendham interviewed an overwhelming number of candidates for the vacant role. Gary would like to thank all the candidates for their time and co-operation during this process especially with the pandemic we find ourselves in.

Jamie and Andy will be adding to their coaching staff over the next few weeks. Mr Mendham was inspired by Jamie and Andy long-term plans and ambitions for the football club

Andy has 19 years of football management experience which ranges from youth football to first team management. His past clubs include, Flackwell Heath, Amersham Town and Risborough Rangers.

Jamie retired from football at the age of 27 following a succession of bad knee injuries. Jamie then went into management at Risborough Rangers Reserves the same year of his retirement to take up an assistant manager role. He then went on to form part of the management team for the future Development side.

Richard has a background from football management, scouting and player agent. He managed Aylesbury FC's Allied Counties team a few years ago whilst working as an independent scout for professional football clubs. As of recent, Richard has joined the Our Game Football scheme as a Player Consultant.

Pre-Season training will be announced shortly. To be a part of this, please contact @TCAFC_Official on twitter for more information.