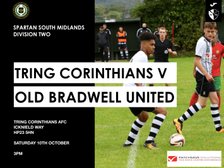 Points shared thanks to Jenkins

Old Bradwell were in town and the league favourites were looking to go top of the league with a win. Up step Tring Corinthians, the 'Corries' were shellshocked following last week's loss at Mursley and were looking to put things right, and they did!

Matthew Hatt started as the lone striker in place of Harry Bennett who dropped to the bench. Calvino Magnocavallo, Darrien Garcia and Liam Batchelor-Morgan all came back into the side while Toby Bennett had to settle for a place on the bench in the reshuffle.

The game started at a real good pace. Corinthians were on the front foot from the off winning balls high up the pitch and creating some half chances through Jake Plumridge and Ben Jenkins. Old Bradwell looked slightly taken back by Tring's approach but grew into the game and looking dangerous from set plays, Jake Plumridge producing to brilliant clearances of the line. But on thirty minutes they were in front. The superb no'10 rose highest from a free-kick delivered into the box and headed past Dan Bobinski. 0-1

This didn't have that much of an effect on the Corinthian players as they still came back at Old Bradwell and created openings. Corinthians won a corner on forty minutes. The excellent Justin Hockley whipped a fine ball in for Matthew Hatt to produce a glancing header into the Old Bradwell net. 1-1

The second half started and it would have been more of the same asked from the Corinthians management team. Unfortunately Old Bradwell were back in front of fifty minutes when the tricky number 11' drove at the Tring backline before getting a shot off from 20 yards which Dan Bobinski got a hand to but snuck in off the post. 1-2

The game went on, Old Bradwell looked comfortable in holding their one goal lead. Corinthians felt some changes would change the game and they did. A debut for Adnelson Da Graca who came on for the tiring Calvino Magnocavallo and Harry Bennett was brought on up front just in front of the work horse Matthew Hatt. Corinthians were going for the equaliser!

Jake Plumridge who was superb from minute one at full back was played in down the right hand side of the 18 yard box and his brilliant low cross couldn't be converted at the back post.

More chances at both ends but on eighty minutes, Corinthians won a corner which Harry Bennett jogged over to take before delivering a ball to the back post for the big centre half Ben Jenkins to fire and header past the player on the post and into the net. Great scenes from the Corinthians bench and fans around the ground.

There was time for one final chance for Tring. Again, another set-piece, Justin Hockley delivered a ball into the box, a bit of a scramble and Ben Sims got on the end of a loose ball but his shot was cleared off the line which would be the last kick off the game. A fair result overall.