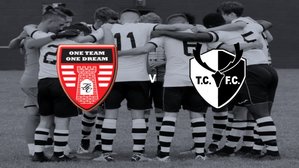 Corinthians went into Saturday's fixture in good spirits following the home draw with Old Bradwell the week before. Those good spirits did not last long as they were beaten by Totternhoe with two goals in the last 9 minutes of the game.

The game started quite evenly. Both sides were find their feet but not too much quality was on hand, this may have been due to the pitch which was not in the best condition and was very heavy. Neither team was able to take a stronghold on the game.

Matthew Hatt had the first real chance, he was played in over the top by Justin Hockley where he poked a ball past the on-rushing keeper and into the net but the assistant's flag was raised for offside.

Matthew Hatt then had Corinthians next best chance, he managed to wrestles his way into the area and tuck the ball past the keeper but the goal was disallowed for an apparent shoulder to shoulder on the big centre half. You have seen them given!

The game then turned and Totternhoe took hold of the game. They were strong in midfield and starting find gaps in the Corinthians half of the field. Totternhoe should have had a penalty when Jake Millman challenged the Totternhoe winger just inside the box and brought the winger down. The Referee waved play on...it was a stonewall! Corinthians had got away with one! This left the Totternhoe bench seething at the Referee. The officiating and decisions on the day was a lot to be desired.

Totternhoe took the lead on 39 minutes when the big centre mid arrived un-marked from a cross from the right hand side and he headed into the net. 1-0

It did not take long for Tring to be level.On 44 minutes, Jake Millman sent a long free-kick into the opposition area and Darrien Garcia rose highest to loop and header over the top of the keeper and into the net. 1-1

The home side started the second half better and took control of the game early. They managed to find more gaps in the Corinthians midfield and run at the backline. The home side didn't create too many clear cut chances but had a stronghold on the game now. On 60 minutes, Corinthians made two changes by bringing on Harry Bennett and Adnelson Da Graca to find a winner.

Tring struggled to maintain passes and were relying on mistakes from the home side but the home side grew more and looked the likely to get a winner. Again, Totternhoe were denied another penalty and this time the Referee gave a bemusing indirect free-kick for a foul on the Totternhoe centre midfielder who was tripped in the box. It was certainly a talking point amongst the benches who could not believe what they were seeing.

Against the run of play, Ben Sims played a through ball between the two Totternhoe centre backs and Liam Batchelor-Morgan raced through one-on-one but his effort was tame and straight at the keeper. A let off for the home side and a miss that would prove costly.

On 81 minutes, A long ball was sent over the top of the Corinthians defence and the Totternhoe no' 9 raced through and unleashed a powerful shot past Dan Bobinski in goal! 2-1

Tring went chasing for an equaliser but once again were caught out with a long ball over the top and the tall no' 9 got in again and finished well for his second. 3-1