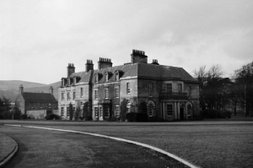 With thanks to John Miller, Founder President

The idea came in a flash during a skittles match at the Hillend pub in September, 1962. We would start a cricket club, called "The Woodcutters", to play evening matches on a weekly basis against anyone who was prepared to field a team.

George McNab, who was busy at that time overseeing the building at the New Agricultural College, agreed to contact the secretary for permission to use the pitch on the Bush Estate near Roslin; David McNeill, Buildings Officer with Edinburgh University, fixed an introduction with the P.E. Department as a source of supply for the kit; and John Miller persuaded fifteen people to join the club and part with £1.00 per head to buy the necessary equipment. We were in business, with a full fixture list by April 1963.

The original aim of the club, which still applies today, was to compete without getting too serious - and to have fun and engender team spirit by getting all players involved. The only way of interpreting this policy was to write our own match rules; this was done and we have no record of ever having opposition objection.

Matches were played each week for many years on the pitch in the splendid surroundings at Bush House (pictured). For the 1982 season, when the cricket square at Bush was taken over for croquet, a pitch at Redford Barracks was used while a search was undertaken for a new permanent home base. This was established at Bangholm, the Trinity Academy ground, where we played from 1983 to 2005.

In 2006, because of the redevelopment of the ground at Bangholm, the club played at various venues, notably Inverleith, before settling for Newfield for the 2007 Season.

The ability to play cricket certainly has a bearing on selection, but the qualification for membership of the club brings into account other factors which are known only to the committee. The number of members is relatively small, which allows almost everyone who wishes to play in a particular game to do so.

For some time now we have had "away" fixtures each year at Gifford and Largo, and more recently Carlton CC where the friendship and hospitality of our hosts is always greatly enjoyed and much appreciated.

In 2008 the club became Associate members of Cricket Scotland, and in 2009 made it's first appearance in the Lloyds TSB Scotland Small Clubs Cup.

Season 2013 saw the club reach its first ever competitive final, the ESCA President's Plate, where they were narrowly beaten by ESCA league outfit Hawick & Wilton in great game.

However the original social ethos of the club remains, and In 2011, the Woodies embarked on their first ever "end of season tour" to Barcelona. This has become an annual event with subsequent tours to Ibiza and Mallorca took place in 2012 and 2013 respectively.

The club celebrated it's 50th year in 2012 and marked this milestone with a special 50th dinner at the Royal Scots Club in Edinburgh.