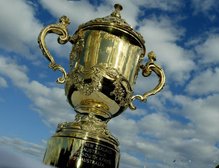 This section covers the range of awards and honours (including eligibility and qualification critera) that Camelot can bestow upon its members which form an essential part of our rich and colourful club history.

A group of Second World War fighter pilots used Camelot as their venue of choice for the annual reunion of the Chiltern Branch of the Aircrew Association between 1972 and 2006. As their numbers dwindled and they dispersed to the local British Legion, such was their love and admiration for the club that their parting gift was the donation of the Excalibur Cup.

The Excalibur is the clubs most prestigious award and the exacting standards set by the Royal Air Force mean that it has only been awarded three times in its 14 year history. In keeping with the criteria for their own Distinguished Service Order (DSO), the Excalibur Cup has very precise criteria;

In the same way the DSO is awarded for courage under fire, the recipient of the Excalibur Cup’s playing style will typically see them put their body on the line above and beyond that expected of a rugby player.

The Cup is awarded by the Club President, currently Mr Antonio Massa at the clubs Annual General Meeting. The three recipients are:

The origins of the Stevens Cup and indeed who Mr (or Mrs) Stevens was continue to perplex the Camelot historians. What we do know is that this cup has been awarded every year since 1953 and as such it predates many of our clubs oldest living members. It is the oldest award the club has and the oldest original cup.

Like the Excalibur Cup, the Stevens cup may only be awarded to a senior player and may never be awarded to the same person twice. It is the clubs second most prestigious award after Excalibur and is given to the individual for meritorious achievement BOTH on and off the pitch for their rugby playing and wider volunteering work around the club.

The Stevens Cup is awarded by the Chairman at the Annual General Meeting with consultation with the Executive Committee.

All 66 winners are enshrined on the club honours boards for posterity.

Donated by Bill Isbister, the Mayor of Hemel Hempstead in 1963, the Isbister Cup is awarded for meritorious achievement on and off the pitch. However, unlike the Stevens Cup, the Isbister may only be awarded to an U17 or a Colt (U18s).

This award is decided by the director of rugby and also presented at the Annual General Meeting. Winners are also enshrined on the clubs honours boards however unlike the Stevens Cup the Isbister has not been awarded every year.

Presented by the Chairman at the clubs Annual General Meeting, the Chairman’s award recognises the crucial role performed by volunteers at the club without whom it would not be possible to operate. The winner need not necessarily be a player or an adult but someone who in the opinion of the Executive Committee has made a vital contribution to the club.

Nominations may come from anyone but must be accompanied by a brief explanation in support.

Unlike the Excalibur or Stevens Cups, the Chairman’s award may be awarded to the same person more than once.

As this award is for volunteering work, anyone receiving any form of payment (monetary or in kind) is ineligible.

Team of the season

Awarded to the most successful team during the season as judged by the executive committee, the Team of the Season is open to all teams across the club (minis, junior and seniors).

This award is presented at the Annual General Meeting.

The following awards are unique to the 1st XV,

Each captain of the senior sides receive an engraved tankard at the end of the season as a thank you from the club.

These awards will be presented by the director of rugby, head coach or captain at the end of season awards ceremony (or players’ dinner in the case of seniors).

VPs and Hon. VPs are ratified at the Annual General Meeting based on nominations received by the Club Secretary. Further information can be found here.

All awards may only be presented to fully paid-up members of good standing; in the opinion of the executive committee.