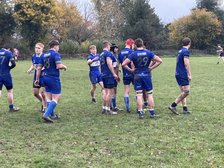 Arriving at 10.45am for an eventual 12.20pm kick-off made for a long day at Chess Valley for another friendly encounter. In truth the game was not one for the purists, but sometimes a game that involves fifteen players trying to batter their way past another fifteen players is not pure, sometimes it comes down to brutality and the ability to scrap out a result. That is exactly what Camelot did in this match.

Despite enjoying some early possession, it was the hosts that opened the scoring patiently building up a move after a well-worked lineout to score in the corner. An excellent conversion and Camelot were 0-7 behind.

Early days, no reasons for the heads to drop and it was not long before Camelot unleashed the secret weapon that would go on to cause havoc throughout the first-half. A line-out on the twenty-two, the maul is formed and slowly starts to drive towards the Chess Valley try line. Play eventually breaks five metres out, but more patient attacking play on the line eventually opened the space for Edward to drive over to score. The conversion is missed, 5-7.

Moments later another driving maul on the other side of the field again gains valuable metres before eventually being stopped, but when Camelot shortly after get a lineout 10 metres from the Chess Valley tryline there was only going to be one move. The lineout is good. The maul is formed and there follows an exquisite execution of a driving maul try as the pack powers towards the line creating the hole for Seb to fall to the ground with ball in hand. 10-7, the conversion is scuffed wide and short.

After the break Camelot had to absorb huge amounts of pressure, struggling to get out of their own half with some rugged defending and at times a less than effective exit strategy, but they simply refused to concede any further points.

Eventually Camelot were back on the attack and into the Chess Valley twenty-two as the game started to show signs of getting feisty with the home side picking up a yellow card for a tip tackle on Dan Jones that led to a few handbags being put on show. With the man advantage it looked as though James Norman had scored when Dan had chipped the ball to the corner, James gathered superbly and dived over the line, only for the linesman’s flag to wave suggesting that his foot had gone into touch.

However, perhaps it was fate, shortly after James did score and again it was after receiving another cheeky chip from Dan, this time after a great catch from a charged down clearance, which was superbly gathered and this time there was no denying James his score. Again the conversion was missed, 15-7.

That proved to be the final score of a scrappy game that did not contain much flowing rugby, more a battle of attrition, patience and determination. At times some players could arguably have been better off concentrating on their playing rather than what they had to say as the match finished with more handbags and petty exchanges, marring what was at the end of a marathon morning in Croxley Green, an excellent fifth successive win of the season.