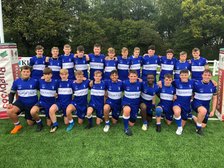 SEVEN-Nil up at the break, Camelot then dominate second-half

In difficult conditions Camelot deliver a performance from the top drawer

It may not have been a Japanese-style typhoon, but the wet and windy conditions on the astro-pitch at Harpenden made for tricky playing conditions in the latest epic encounter between these two sides.

With the wind blowing directly across the pitch there was no real advantage as to which way you were attacking, it was equally treacherous for both teams. However, it was the hosts that applied the early pressure, literally pinning Camelot inside their own twenty-two for the first fifteen minutes of the match. The blue wall (in their shiny new kit) stood firm, blocking the attacks, tackling hard and frustrating the opposition.

For all the defensive fight, Camelot struggled to create an attack of their own as attempts to clear were foiled by a charged down kick, a rare handling error or an equally resistant Harpenden defence. After twenty-minutes the ball was finally in the Harpenden half. The score was still 0-0. For all their endeavour and attacking prowess, the home side had failed to score during their period of dominance, and that would prove crucial in the outcome of the game.

Camelot were now back in the game, building attacks of their own, forcing their way forwards and on the half-an-hour mark they made the break-through. After a series of penalties ten metres out a quick tap and go by Freddie set up the chance for James Isaac to drive through the defence and score under the post. Dan with the easy conversion and Camelot were 7-0 ahead at the break.

After all the defensive exertion in the first period Harpenden will have been justified in thinking that their opponents would tire in the second period and be there for the taking, but it turned out to be just the opposite.

From the kick-off the hosts were under-pressure from a handling error. Another ridiculously strong Camelot scrum set up the play for James Norman to pick up the ball out wide and run the ball in from the twenty-two under great pressure from the defence. Kicking into a strong wind from out wide Dan’s conversion was an absolute peach, doubling the lead to 14-0.

By now there was only going to be one winner. Not for the first time, the boys had ridden the early waves of attack from the opposition; absorbing and frustrating before unleashing a dominant display of well-drilled attacking moves, switching the play between Forwards and Backs seamlessly, everyone playing their role superbly.

The next try came from another set-piece. This time a well-executed line-out set up a strong driving maul, setting the scene for Terence to use his pace and power to drive over the line and down the ball with two defenders hanging off his back. Once again, the conversion is exquisite from Dan in the conditions. 21-0.

The match was much tighter than the score suggested, the difference being that when Camelot had the ball on the attack, they looked like scoring, whilst, despite long spells of possession, Harpenden rarely looked as though they would breach the blue and white defence.

The final score of the day yet again started life as a set-piece. The Camelot scrum had been so powerful throughout and it was fitting that the last try started with a scrum that pushed Harpenden back five metres from their own line. With the battle of the packs won it was down to the Backs to finish the move, Dan popping the ball out to Terence who drove over the line for his second score of the game. Compared to his earlier efforts the conversion was easy for Dan, completing the 28-0 win.