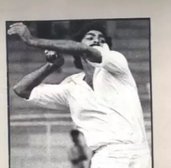 Long before Ajay or Ravindra Jadeja made their place in the list of all-rounders from the princely state of Jamnagar, there was a Jadeja who mirrored the term utility cricketer

Rajendrasinh Jadeja was the Kathiawadi (origin from the state of Saurashtra) version of the Trojan horse. The Trojans believed the huge wooden horse was a peace offering to their gods and thus a symbol of their victory after a long siege. Raju wasn’t much dissimilar. A hard competitor but a soft affable gentleman off the park. There was a Zen-like state of being when you met him off the park. Contented and in the present. Articulate from his Raj Kumar College breeding he spoke eloquent English but with a Kathiawadi drool. His roots were strong even though his upbringing had a sprinkling of the leftover British Raj.

In an era when Eknath Solkar and Abid Ali epitomised the Indian Allrounder, Raju was that and much more.

Growing up one heard and read of a group of youngsters who were at the cusp of bigger things. Vengsarkar, Patil, Mohan Raj, Rahul Mankad, Suru Nayak, and Jadeja formed the core of those set for bigger things. Some made it some didn’t. Timing of success has a lot to do with the last frontier, Jadeja may not have had the timing like many who lost out bit it didn’t undervalue his demeanor as a utility man.

Post his cricketing days one often bumped into him at games where he was a match referee. His public school meticulosity caught your eye. One couldn’t miss the clean shave, the flannel greys with a blazer, or the well-polished leather shoes. He must’ve taken a lot of pride in what he did. It showed in his appearance.

One remembers colleagues and seniors for the good times and the laughs that they shared. I had heard that some of his friends light-heartedly referred to him as Asrani. (the famous Bollywood actor).

During the Saurashtra premier league where he was a coach, I picked up the courage and maybe mustered the audacity to ask a senior of mine “Bapu, what’s the story about the name Asrani?” His smile and the glint in his eyes took him back in time with his Nirlon teammates and the laughs in the locker rooms, one sensed as he replied. “hum Angrezon ke zamane ke jailer hai, Ha-ha" the iconic lines by the actor in the film Sholay.

“Let’s catch up for a nallu (small drink) and laugh about old times he said. The nallu and the laugh never happened. What remains are the memories of a lion-hearted cricketer who gave you the impression that the gods had blessed him to play the game.

Bapu will bring a smile when you rewind and pause the button on memories from the game. A smile that has more meaning than not having played for India.