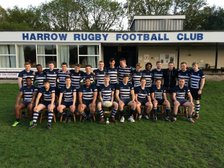 Saturday 9th May saw the Colts section hold their end of season awards at the clubhouse.
In what had been a very successful season for the team, winning Division 3 of the Saracens Herts/Middlesex league, and reaching the last 8 of the cup competition the evening was an opportunity to celebrate, not only achievments on the pitch but also some great contributions off the pitch also.
the evening was organised primarily by Edelle Carr who as this seasons Team Manager was completing her 12th season as Team Manager with the club, and has followed the older colts since Under 7s, dedicating a huge amount of time and effort over the years.
Quite rightly, the club recognised this achievment with the presenation of the Peter Pope award to Edelle, which is given annually to someone who has given outstanding service to the club, and is named after the founder of the Junior Section of the club back in 1974. Well and truly a deserved recognition.
Then onto the awards themselves for the players, which as usual had 3 main recipients.
Most Improved Player - George Ofusu-Osei - who it was felt had taken a further step forwards in terms of play this year, with more aggression, stronger ball carrying and showing that despite being a year younger than most teams had a never give up attitude which permeated throughout the team.
Coaches Player of the Year - Callum Raybould - Callum showed everything you look for in a rugby player this season, determination, aggression, leadership, a constant threat with ball in hand, and a tackling ferocity which never waned.
Players Player of the Year - Shane ODriscoll - the award which carries the most gravitas, as voted by peers, Shane had a fantatsic season at no10, dictating most games with a maturity way above his years, being able to select the appropriate option when ever with ball in hand, and being the catalyst for a back line of a team which ran in 60 tries over the course of a season. He also converted in the region of 90% of all his kicks - and was also an integral part of the team bonding which took place across the season.
Mention must also go to all of the coaches, medical and support staff which were part of a fantstic season - parents who ferried players to and from games home and away, and of course all the members of the squad for being part of one of the most successful seasons for either of the combined age groups for a number of years.
A fantastic spread of food - thanks Edelle and Charlie and all others who contributed, and by all accounts a celebration into the night and early hours of Sun morning was enjoyed by all.
A well earned rest - and then back to pre-season for those still with the club next season - and good luck to those moving on to Uni, further study, or just work in general - always welcome down at the club - and will always be part of what was a special season for Harrow Colts for so many reasons.