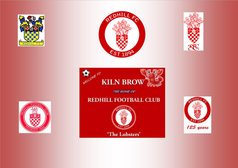 Redhill FC was formed in 1894 and two years later, the club moved into its stadium of 88 years-Memorial Park, in the centre of the town. Redhill became members of the Athenian League in 1923 and remained there until the league’s demise in 1984. Success came early, being runners up and champions in their first two seasons in the league. In 1925/26, the club enjoyed possibly its best season; reaching two cup finals and reaching the semi-final of the FA Amateur Cup, losing to Northern Nomads at Arsenals Highbury stadium in front of 17,000 people. In 1949, Redhill lost to Arsenal 1- 0 in a friendly that was offered by the Gunners after Redhill provided them with two of their best players at the time; Colin Grimshaw and Bernard Sexton. In 1957/ 58, Redhill reached the FA Cup 1st Round Proper for their only time. After beating Tooting & Mitcham in the previous round, the Reds travelled to Norwich City, only to lose 6-1, but many write ups at the time gave Redhill plenty of credit for their performance. After winning the final Athenian League title in 1984, the Reds were moved into their current home, Kiln Brow. Lack of facilities meant the club could not take their rightful place in the higher league and instead found some success in the London Spartan League, before moving onto the Sussex County League in 1988. After many brutal years of ups and downs, following hard work by many club officials and supporters keeping the club alive, Redhill eventually found themselves as runners-up of the Sussex League Division One in 2013, winning promotion to the Isthmian League Division One (South). Redhill’s time in the ‘Ryman’ league was relatively short lived. They finished 3rd from bottom in the relegation zone in their first season but survived when offered a reprieve. The Reds were not so lucky in 2014/15, finishing 2nd from bottom. Again, a reprieve was offered but to play in the Southern League—South & West Division. This was turned down based, amongst other reasons, travel logistics and the financial implications. After back-to-back relegations, the club needed a positive season to build on. The 2016/17 season gave the club that platform, finishing runners up in Combined Counties Division One and gaining promotion, whilst also finishing runners up in the Division One Cup.
The Reds will play in the Combined Counties Premier Division in 2018/19 and the 2019/2020 season sees the club celebrating its 125th year. A new manager Harrison Williams was appointed after the resignation of previous manager Barry Wilde. Harrison was his number two and was chosen by the committee to continue to nurture our young squad and improve the standard of our play.
Covid -19 has curtailed the 2020/21 season and se we did not complete all our games that season. As a bonus, Redhill FC won the Combined Counties Premier League Cup in 2020/2021.