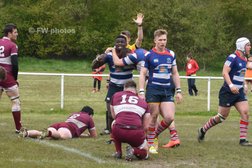 Sheffield rise like a Phoenix from the ashes to steal an unbelievable win and gain promotion to National 2 North.

Sheffield travelled to Rossendale with the same squad of players who had guaranteed the play off last week in the win over Bridgnorth last week with the addition of Hooker Sam Whitworth to the squad, the play off allowing both teams to have an additional player on the bench. Jack Hedley moved up from the bench to the starting line up, on the wing, with Danny Williams dropping down to the bench.

The early exchanges were very much defined by the two teams' defences, which showed no sign of cracking. However, with ten minutes gone Sheffield were awarded a penalty by referee George Selwood for an offence at a scrum after the scrum had already been reset. Full back Joe Cribley obliged the visitors with the 3 points and the lead. The elation was to be reasonably short lived, with Rossendale making some serious headway through the Sheffield defence before spinning the ball wide right for wing Leyton Taylor to score wide out on the right. Fly half Steve Nutt added a fine conversion and Rossendale had the lead at 7 points to 3 after 17 minutes. Things generally went from bad to worse for Sheffield just 3 minutes later with a penalty in Rossendale's favour and wing Jack Hedley being awarded a yellow card. Rossendale kicked to touch in the corner and moved further ahead when loose head prop Alex Isherwood crashed over the line wide out. Nutt failed with the conversion, but with 22 minutes gone Rossendale led by 12 points to 3. Neither side was able to dominate the proceedings, exchanging penalties and knock-ons, until with the half almost complete, Sheffield were awarded a second penalty at a scrum almost directly in front of the posts. Joe Cribley added the points for a second time to reduce the Rossendale advantage to 12 points to 6. There was one last opportunity for Rossendale to stretch their lead with a penalty right on half time, wide out to the right, but Steve Nutt was unable to convert and the half ended.

The second half saw Rossendale straight out of the traps and pushing hard into Sheffield territory. A penalty on 2 minutes for a high tackle saw Rossendale go to the corner again before bringing the ball back to the left for full back Curtis Strong to go over for Rossendale's third try. Nutt failed with the conversion again, but with 44 minutes gone they led by 17 points to 6. However, two minutes later Rossendale suffered the same way Sheffield had in the first half when Fly half Steve Nutt was yellow carded by referee George Selwood and Sheffield kicked to the corner. The pack took the ball over the line from the line out, but the referee decided it was held up. From the scum the ball was worked left to wing Jack Hedley who went over right in the corner. Joe Cribley's conversion sailed over and Sheffield were back in the game at 17 points to 13 down after 49 minutes. Sheffield were able to keep the pressure up on Rossendale and were soon on the attack close to the Rossendale line after consecutive scrum penalties against Rossendale. Sheffield secured the line out ball and drove for toward the try line once again, again switching the ball to wing jack Hedley to go over in the corner for his and Sheffield's second try. Joe Cribley missed the kick from wide out, but Sheffield had battled back to take the lead at 18 points to 17 after 55 minutes.

However, the return of Steve Nutt from the sin bin appeared to raise Rossendale's spirits and led to a break down the right side of the pitch for Rossendale's George Peel to score wide out to the right. Steve Nutt added the conversion and led by 24 points to 18 after 58 minutes. Rossendale then lost another player to the sin bin just 2 minutes later, but they remained totally unfazed and put together another brilliant attack that left the Sheffield defenders pulled in so tight that the run in to the left corner for the Rossendale full back, Curtis Strong as easy as it can be. Steve Nutt added the conversion and with 64 minutes on the clock Rossendale looked to have established an unassailable lead at 31 points to 18. However, Sheffield had other ideas and knew the yellow card would in such a tough match lead to space and defensive errors. Sheffield went hunting for redemption and were again successful at the scrum with a penalty allowing the visitors to take the attack right up to Rossendale's 5 metre line. A short delay ensued whilst a Rossendale 2nd row received attention for an injury, but Sheffield were soon up and running and much in the way Rossendale had pulled Sheffield in a few minutes earlier, then Sheffield did so to Rossendale and once the ball came back to the right, Rupert Broadley need no further invitation to touch down wide out on the right. Joe Cribley once more found a wonder kick and the Rossendale lead was down to 31 points to 25 with 7 minutes remaining. Sheffield secured the kick off and set off full of aggression down the left side of the pitch and after one or two slight hold ups, Sheffield scored their fourth try just 3 minutes later, through replacement prop forward, Tobi (The Wrecking Ball) Ademakin, but right out on the left touch line to leave Sheffield behind at 31 points to 30. Joe Cribley, nervelessly added the conversion to take Sheffield into an unlikely 1 point lead at 31 points to 32 with 4 minutes to play. Sheffield secured the kick off and shut up shop, keeping the ball in the forwards and endeavouring to ensure no mistakes, no knock ons and no penalties. After what felt like an eternity, the referee call time over and scrum Steve Depledge smashed the ball off the pitch giving Rossendale no chance to get near it, and Sheffield had secured an amazing and hard fought win against our Northern Division rivals.

We now look forward to playing our local rivals, Sheffield Tigers in National 2 North next season after they secured their own unlikely win away to Luctonians to secure their place in the league for next season, condemning Harrogate to relegation to National 3 North.