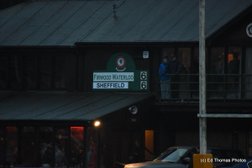 Sheffield battle the weather to come away from second placed Waterloo with a draw.

Following the bonus point win at home to Rossendale last week, Sheffield travelled to second placed Waterloo, now called Firwood Waterloo, Firwood being their sponsor. The weather was less than favourable to Sheffield, their had been heavy rain overnight and throughout the whole morning before the match and running rugby looked a dim and distant prospect.

The early exchanges saw Waterloo's larger pack of forwards giving the Sheffield pack quite a hard time, but Sheffield responded well and when Waterloo encroached into Sheffield territory and a line resulted from the pressure, Sheffield consistently secured the ball and cleared their lines well. Both teams suffered from numerous and copious handling errors and with both teams defending well opportunities to score were almost nonexistent. Sheffield however, made the initial break through when Sheffield were awarded a penalty and full back Joe Cribley put the visitors ahead on 18 minutes, 3 points to nil. However, Waterloo were to attain parity on 29 minutes with a penalty through their fly half, Liam Reeve. Waterloo had a further opportunity to go ahead on 34 minutes, but the attempt as missed and the half petered out without any further score.

As the game wore on Sheffield came much more into prominence as the Waterloo pack tired and were rewarded on 50 minutes with a second penalty to Joe Cribley to move Sheffield into a 6 point to 3 lead. Sheffield's backs were now getting much more clean ball, but Waterloo's defence held firm and Sheffield could just not get that score which would break the home side's resistance. Sheffield were however, given a further opportunity on 59 minutes, as Waterloo's loose head prop was despatched to the sin bin. Unfortunately, Joe Cribley missed the kick from only 22 metres out and the gap between the teams remained just 3 points. Then as is oft the case when the vital break through has not been made, Sheffield erred with but 4 minutes to go and Waterloo's fly half made no mistake to tie the scores at 6 points each. Sheffield managed to work their way back up into Waterloo's 22 zone but were unable to persuade Waterloo to give them another scoring opportunity and the referee called time on the event.