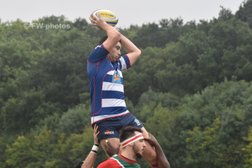 Following the hard fought win away at Bridgnorth last week, Sheffield had to travel away once more, to Broadstreet RFC in Coventry. The only changes to the Sheffield team were at hooker, with Michael Bradford coming in for Sam Whitworth and Alex Fawdry and Gareth Morley returning after missing the trip to Bridgnorth.

Sheffield started the match with a little bit of luck going their way. Kicking of into a strong breeze the kick did not go 10 metres, but was played by Broadstreet, who then lost the ball into touch to give Sheffield a line out on half way. The early exchanges were however, fairly even and Broadstreet had the first opportunity to score with an attempted drop goal on 7 minutes, which was both short and wide of the target. From this point however, Sheffield began to get a little on top and after a few minutes were attacking in the Broadstreet 22 metre zone. Broadstreet made an error leading to a 5-metre scrum to Sheffield, then a penalty, a line out and to a try to Tom Womack just to the left of the posts. Joe Cribley converted and Sheffield had a 7 point to nil lead after 14 minutes. Sheffield continued to pressure the Broadstreet defence and were rewarded with a kickable penalty on 25 minutes. Joe Cribley converted the opportunity and Sheffield led by 10 points to nil. Sheffield added to their score just 4 minutes later when Broadstreet chipped over after a line out on Sheffield's 10-metre line. Sheffield secured the kick and the ball found its way to right wing Rupert Broadley who demonstrated his elusiveness to Broadstreet by scoring 10 metres to the right of the Broadstreet post. The conversion was missed, but Sheffield led by 15 points to nil after 29 minutes. Sheffield had one more opportunity to increase the lead, but Joe Cribley's penalty attempt on 40 minutes went wide and the half ended with Sheffield holding a fifteen point lead.

Broadstreet were able to reduce Sheffield's advantage just 2 minutes into the second half, when they were awarded a penalty for a high tackle which they converted to reduce the lead to 3 points to 15. However, Sheffield were still the more dominant of the two teams and were able to add to their tally on 56 minutes when flanker Tobi Amemakin was able to go over wide out on the left after a break from Joe Cribley and then some good driving from the forwards. Joe Cribley could not add the conversion, but Sheffield led by 20 points to 3. However, Broadstreet was able to get back into the game, when Sheffield were initially awarded a penalty on their 5-metre line, which was reversed by the referee and Alex Fawdry was issue a yellow card. Broadstreet took full advantage and a minute later were awarded a penalty try. The try was converted and the score stood at Broadstreet 10 points and Sheffield 20 after 64 minutes. However, Sheffield soon recovered and just 4 minutes later were rewarded with a penalty and Broadstreet got a yellow card of their own. Joe Cribley converted and the lead was out to 23 points to 10. The action continued, but neither side could trouble the scoreboard and the match ended with a moderately happy Sheffield, having secured two early season wins way from home.