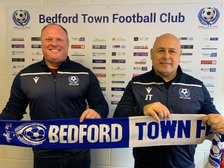 Bedford Town Football Club are delighted to confirm the appointment of Gary Setchell as Manager. The 45 year old is no stranger to the non league game, having had a successful career as a player and then a manager.

Setchell spent his playing career at Rushden & Diamonds, winning the Football Conference and Football League Division Two. He reached the FA Trophy final with Kings Lynn, before going on to win the Southern Premier League with Kettering. He also gained promotion as a player with Sudbury Town, Fakenham Town, Swaffham Town and Wisbech Town.

After hanging up his boots, Gary became Manager of Wisbech Town in 2009, before moving to the hot seat at Kings Lynn in 2010. During seven successful years at the Linnets, he guided them to promotion from step five, and again promotion from step four. Several good runs in the FA Cup and FA Trophy also were part of his time at the Walks. He holds the proud record of having managed over 500 games across step five, four and three, and never having lost from being two goals up.

The club are extremely happy to have attracted an individual who has won promotion at this level, something that was a key part of the recruitment process of the new manager.

Speaking to www.bedfordeagles.net, new Manager Gary Setchell said "I'm coming to Bedford as I feel the time is right to get back into the game. It is a club with massive potential. Having met with the owner, Jon and James (Football Secretary), I was impressed with their commitment to the club and where they want the club to move forward to. We've got a lot of work to do, but I'm ready for the games to start coming."

Owner Jon Taylor commented "When James and I discussed options for what we wanted from the next manager, we both agreed that a candidate who had achieved success at this level of football was vital. In Gary, we've secured the services of a manager who has done this and more, and is respected by players and many others in the non league game. I can't wait to get him involved and see his drive in action to move the club forward."

Tomorrow the Eagles have no game, as we received a bye in the FA Trophy. The Eyrie will be open for an open training session starting at 10am, followed by Maxey's being open for the lunchtime Premier League game. There's also a supporters working group day, completing painting and other tasks. All help is most welcome from you all!

Gary's first game in charge will be Tuesday night's home fixture against Berkhamsted FC before Barton Rovers visit the Eyrie on Saturday. You must buy tickets in advance to attend these fixtures, and you can get them now at https://bedfordtownfc.ktckts.com/