Welcome to Bedfordeagles.net the online home of Bedford Town Football Club. Stay tuned for all match updates, signings, news and much, much more! Why not join... Welcome to Bedfordeagles.net the online home of Bedford Town Football Club. Stay tuned for all match updates, signings, news and much, much more! Why not join as a club member at the top right hand corner to be even closer to the action, with weekly roundup emails.

Entry to all home matches is by advanced ticket or turnstile ticket. Advanced tickets can be purchased via the Bedford Town Box Office and can be printed off or preferably presented to the turnstile for scanning on a mobile device. Each ticket has a unique QR code and can only be used once. If you need more help with your online ticket purchase, a video presentation with more information is available here.

Cash and card payments can also be made at the turnstile, but there is a £2 surcharge on all tickets. Full details of ticket prices can be found here.

Bedford Town Football Club was formed in 1908 and has had a mixed history that has seen it reach the higher levels of non-league football, with some notable cup runs on the way. 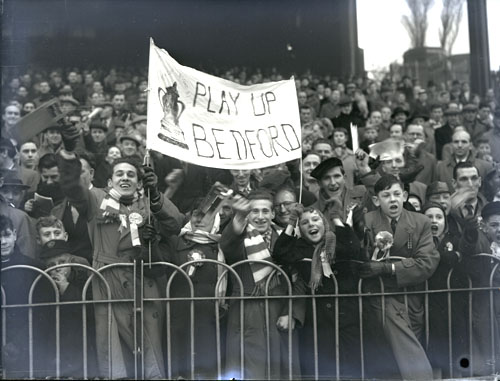 The Eagles started life playing in the United Counties League, and its predecessors the Northampton League and Northampton Alliance. In 1945 they moved to the Southern League but had little success until 1951 when player/manager Ronnie Rooke joined the club. Having a well-known former England and topflight footballer, inspired the local population to back the club, which paid off with some notable scalps in the FA Cup in the mid 50’s when Bedford saw national fame as giant killers. Notable victories included Watford 3-2, Norwich 2-4, Newcastle 1-2, Exeter 1-2, Brighton 2-1 and Oxford 1-0, but maybe the 2-2 draw at Highbury against Arsenal in front of 55,000 fans was their biggest achievement. 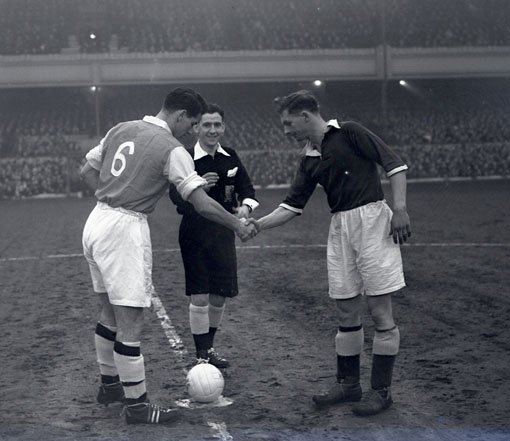 Rooke’s management reign came to and end and the 60’s and 70’s saw a string of managers including Barry Fry in 1977 who was followed by Trevor Gould. The last match for the Eagles at its home in Queens Park was in 1982, when the grounds leaseholders reserved their right to terminate their contract. After 74 years, Bedford’s football team was no more.

Bedford Town supporters have always been a determined bunch, and on 5th May 1989 some of them met with the aim of starting a campaign to reform the club. That campaign was so successful that they soon got council permission to play on a public pitch in Queens Park, finishing fourth in the first reformed season in the South Midlands League. Runaway success in the 1992/3 season under Terry King and Tony Sullivan saw them needing their own ground to progress.

The council decided that the most appropriate location for the club was at a former tree nursery at Meadow Lane in Cardington. With financial support from the council and hard work by supporters the ground was ready for its first match Infront of a bumper crowd of 3,000 at the New Eyrie when Peterborough United came to town.

The Eagles in their new home started life in the SML Premier Division and remained top all season, meaning more work at the ground was needed. Two more successive promotions followed before the club hit a stumbling block and risked relegation. The decision was made to Bring Mick Foster in as manager from Buckingham Town, who brought several of his players with him, rescuing the season where they finished in eighth in the end. 97/98 was Fosters best season, narrowly missing out on promotion and winning the Vandenel Cup and the Beds Premier Cup.

Former players Jason Reed and Tony Luff took over as joint managers in 1998/99, having a good run in the FA Trophy, finally losing to the eventual winners Tiverton Town in the fifth round Infront of a bumper crown of 1,566 at the New Eyrie.

Roger Ashby arrived the following season, with another strong cup run, this time losing out to Conference side Yeovil Town in the fourth round of the FA Trophy Infront of 2,010.

The change of millennium also saw changes for the Eagles as they become a Private Limited Company, owned by David Howells. A generally poor season but great run in the FA Cup saw Match of the Day cameras arrive at the Eyrie as a bumper crowd enjoyed our 0-0 draw against then Division 2 Peterborough United, the replay at London Road saw Bedford miss out in a 2-1 score line. 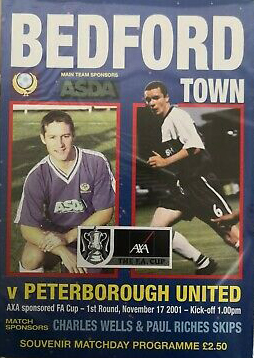 Ashby’s departure saw the arrival of former Northern Ireland international and Northampton Town Manager Kevin Wilson, results improved with him, but he soon departed to Aylesbury United. Dave Randell was next to take charge, but a poor run of results saw him replaced by Nick Platnauer.

Platnauers first season in charge saw the team just miss out on promotion, but his second in 2005/06 saw the club move into its new facilities at the beginning of the season with a new function room and football facilities up to National Conference standard. The club were consistent throughout the season and earned a Playoff final spot at Chippenham. The Eagles had their day with a magnificent 3-2 win, the winning goal coming from a wonder strike by Tom Bonner two minutes from time. The Eagles now facing a new challenge in Nationwide South, the highest standard the club have played in since re-formation in 1990.

The Eagles found life hard in the Conference South and in February 2007, Platnauer resigned, being replaced by Stuart Bimson. Results improved, but they were not enough to prevent relegation, and Bedford’s short foray into Conference football was over.

Things got worse the following season, with a second relegation only avoided by the financial problems of other teams. Lee Howarth took over in the 2008/09 season, but struggled to find form, being replaced the following season by former Reading Captain and Welsh International Ady Williams. Survival in the division came in the last game of the season, where a 2-0 win over Tiverton saw survival by a point. The following season saw assistant manager Ady Hall promoted to the top job, but he struggled to find form and Nick Platnaeur returned to the club as his assistant before taking the helm again.

Platnaeurs departure in 2013, saw a string of other manager appointments in the following years. Lee Barman from Cranfield United, former player Danny Nicholls, and Wellingborough Manager Craig Adams, who was in charge as the Eagles were relegated to Southern League Division One.

Jon Taylor took over in 2015/16 and his first full season in charge the following year saw a mid-table finish.

The 2017/18 season saw one of the clubs most significant moments, when in February 2018 the club was brought by a local consortium headed by David and Jon Taylor, while on the pitch the team missed out on playoffs, finishing once in 8th place. Rebuilding, of the club and the team followed during the Summer with several former league players joining. The team enjoyed a fantastic run in both the FA Cup and Trophy in 2018/19, but that affected results in the League, although they did make the playoffs, losing out to Corby Town.

On 13th October 2019 the passing of owner David Taylor, saw his son and Manager Jon become club Director. With Jon moving upstairs Assistant Manager Nathan Abbey stepped up as Manager, winning his first match, but losing the next seven in nine, eventually being replaced by former player Mark Duckett. The season was declared null and void due to Covid-19, and work began preparing for the resumption of football in September 2020. An early exit in the FA Cup and defeat in the first League match last season aw Duckett depart, to be replaced by current manager Gary Setchell. Setchell and his assistant Darren Edey started their tenure well last season, remaining undefeated until the season was eventually curtailed once again.