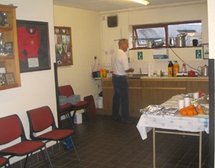 1. The colours of the Club shall be RED & WHITE.

3. The Rules and Regulations of the National Associations controlling Amateur Football shall be adopted for all matches played by the Club.

4. No football matches shall be played on Sundays, unless passed by a majority of at least three quarters of the members present at a General Meeting.

5. No alteration of, deletion from, or addition to these Rules shall be made except by a Resolution carried by the majority of at least two-thirds of the Members present at a General Meeting, notice of which shall have contained particulars of the proposed alteration, deletion, or addition.

6. If at any General Meeting a Resolution for the dissolution of the Club and such notice has been duly given, shall be passed by a majority of at least three-quarters of the Members present, the Committee shall thereupon, or at such future date as shall be specified in such Resolution, proceed to realize the property of the Club and after the discharge of all liabilities shall apply the same in such manner as the Committee may by Resolution determine, and upon the Completion of such application the Club shall be dissolved.

7. Any questions arising as to the meaning of any of these rules or any Rule or Bye-Law made there under, or as to the application or effect of any such Rule or Bye-Law shall be determined by The Committee, whose determination shall be final and binding.

9. The quorum of a General Meeting shall be 10 ordinary members.

10. RESOLVED that the Trustees appointed by a Resolution of the Club dated the 10th day of November 1971 shall take a Conveyance of the playing field part of Eithin Duon, Cwmyglo and shall deal with the property by way of sale, mortgage, charge, lease or otherwise as directed by the Club. Such direction shall be given by Resolution of the Club passed by a majority of the members thereof at a duly convened meeting of the Club and when passed shall be binging in favour of a subsequent purchaser, mortgagee, charges or lease for value on all Members of the Club. A Certificate purporting to be signed by the Secretary for the time being of the Club shall be conclusive evidence in favour of the said persons that a direction complying in all respects with the above provisions of the Rules was duly given to the Trustees.