Rugby shares a history with both American football and soccer, so you will see a lot of similarities. For someone who has never seen a game of rugby, think American football with no pads and no stoppage of play between downs, and you will have a good first idea. Like soccer, play is continuous until someone scores, the ball goes out of bounds (we call that "in touch"), or there is a rules infraction. Like football, the ball is carried and passed (though only sideways and backwards, not forwards), and there is a lot of hard-hitting action.

So What Is the Goal?

Just like in football, the objective is to score (we call it a "try") in the opponent's end zone (what we call a "try zone"). You actually have to put downward pressure on the ball (press it to the ground) to score a try (worth five points), so you will see a lot of diving and sliding in the try zone. Just like in football, you get to kick for extra points after scoring a try. In rugby, though, it is worth two points, and you have to kick straight out from where the try was scored. This means you will see guys run around toward the center of the try zone before touching the ball down to make for an easier kick. It is also possible to kick for points after certain penalties or to just make a drop kick during open play.

Are There Positions in Rugby?

There are specific positions in rugby, but they are not nearly as rigid as in American football. During setpieces like scrums and lineouts, everyone is assigned a task like in an American football play, but that quickly degrades into open play where everyone needs to think on their feet and fill in where needed. Unlike football, everyone has a chance to run with the ball and score.

The fifteen players on the field are divided into eight forwards and seven backs. The forwards are the big guys whose job is to get and maintain possession of the ball. They are the ones who do most of the work on setpieces, like scrums and lineouts, and dominate rucks and mauls. The backs are the speed demons. They excel at passing the ball quickly and finding holes in the opponent's defense to exploit to make big gains in field position.

Wait, What Is a Scrum?

Rugby open play is free-flowing and constantly moving. After a minor rule infraction, however, play can be stopped. A scrum is how it is restarted. Each team's eight forwards bind tightly together with their front row binding onto the opposition. The ball is thrown into the middle, and the teams struggle to take possession. While each team tries to push the other off the ball, they also try to hook the ball back with their feet to the rear members of the scrum. Until the ball actually comes out of the scrum, no one can touch it with their hands. Once it does come out, it is usually thrown out to the backs to try to advance it down field.

OK, Then What Is a Lineout?

A lineout is how play is restarted when the ball goes out of bounds ("in touch"). Several forwards from each team form a line perpendicular to the sideline. One player from the team that did not take the ball into touch then throws it in between the two lines. Players then attempt to grab the ball out of the air to win possession for their side. You will often see players hoisted into the air by their teammates to gain an advantage. Once won, the ball is generally thrown out to the backs who are set and ready to attack.

We said that play is continuous until someone scores, someone takes the ball into touch, or there is a rules infraction. So, then what happens when the ball carrier is tackled? That is where rucks come in. When the ball carrier is taken down, he cannot hold onto the ball but must release it. The tackler must release him and roll away. That leaves the ball open for someone from either team to pick it up and keep moving. If, however, there are players from both teams over the ball when it is released, a ruck is formed. Now the players cannot touch the ball with their hands. They must struggle either to push the other team off the ball or to hook the ball back to their own players with their feet. Once the ball exits the ruck this way, it is back in play and can be picked up again.

A maul is what happens when the ball carrier gets stopped by the other team but is not brought to the ground. You will see players from each team run to support the maul by pushing from their side. This can go on for a while as long as ground is being covered. If the maul stops moving, then the ref will restart play with a scrum. To avoid this, the team with possession will try to work the ball back through the maul, and once they stop gaining ground, they will pass it out to their backs.

I Have Heard of Rugby Union. What Is That?

Rugby Union is the sport that we play. It is a similar sport to Rugby League, but there are significant differences as well. Everything here describes Rugby Union play.

OK, So What Does an Actual Game Look Like? 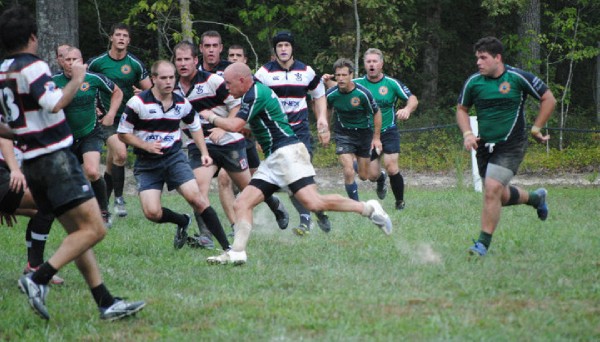 Play starts off with a kickoff. Unlike football, the scoring team receives the ball on kickoffs after a score. Our team is receiving and has positioned themselves so one of our faster forwards is in the right place to catch the ball. He calls it in the air, catches the ball, and, as he is a good forward who pays attention to his coach, charges down field looking for a hole in the opposition. He breaks two tackles but is finally brought down after several meters. Several of his fellow players had been following closely for support (since they are not allowed to be in front of the ball carrier or block for him) and are ready to help. 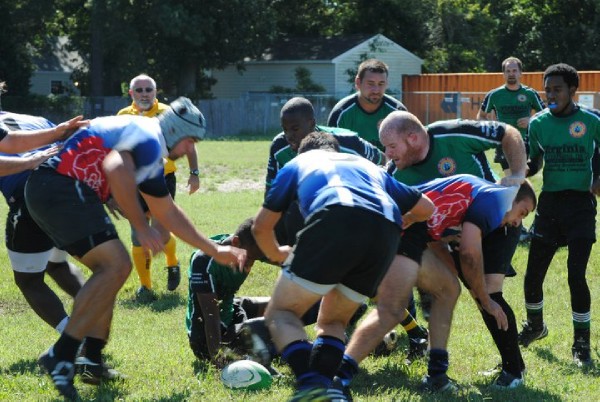 The first two support players ruck over the ball, meaning they knock the defending players back away from it. That leaves the ball open for another of our players to pick it up and quickly pass it to a waiting back. The backs had been expecting this and are ready to go. They pass it from one to the next down toward the other side of the field. They have to pass the ball sideways or backwards, but since each is catching it while at a full run, they do not lose much field position. Finally, one of them sees an opening, so instead of passing it, he shoots forward through a gap in the defenders.

Our back makes a lot of forward progress, dodging and weaving, before defending players manage to grab hold of him. He struggles to maintain his footing, giving his teammates time to catch up to him. Finally, he hears cries of "Down! Down!" which lets him know his big forwards have finally caught up. He immediately drops to the ground, placing the ball back toward his own team while the forwards hit the defenders to protect the ball. This time, though, there are enough defenders that it takes several seconds to push them back enough to win control.

The scrum half (one of the backs) gets ready to pull the ball out of the rear of the ruck. If the opposition were to run around the ruck now, they would be offsides, but as soon as he grabs the ball, he is fair game. He hears calls of "Left, left, wait, wait, now!" from behind him. On cue, he tosses the ball short to his left to the three forwards running at full speed past him. They slam through the defense, but in the melee, the ball carrier loses his grip, and the ball slips from his hands and falls forward. 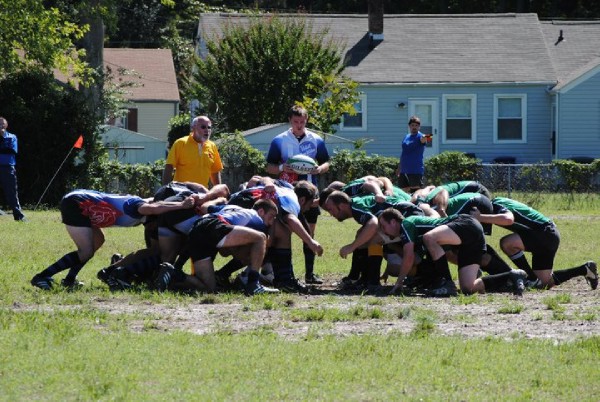 The ref blows his whistle and calls a "knock on"; forward passes are illegal, and so is dropping the ball in such a way that it goes forward. This results in a scrum where the knock on happened with the other team getting the opportunity to put the ball into the scrum. The two teams each bind to their own players and face off against each other. On a call of "Crouch, bind, set!" from the ref, the two bound units surge forward into each other, the front rows interlacing heads. The opposing scrum half rolls the ball into the scrum from the side, and the two teams vie for control. 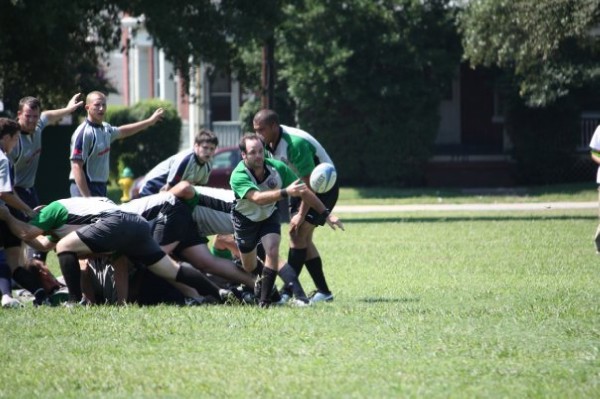 Though our forwards are smaller, they have better body position and work better as a unit, making it easy for them to drive their opponents back. It is only a few seconds before our team has won the ball back and it comes out the rear of our scrum. The ball is thrown to a waiting back behind the scrum. Unfortunately, he fumbles and drops the ball. The ball falls backward, so it is not a knock on, but the opposing team is advancing quickly and he has little support. Desperate, he solidly kicks the ball downfield.

The kicker immediately runs full-speed downfield. He knows that everyone in front of him is offside and cannot interfere with play until he passes them. Before the ball has even landed, he manages to put all of our players onside, and the team advances as a unit. Unfortunately, the ball takes a strange bounce and goes into touch (out of bounds on the sideline). 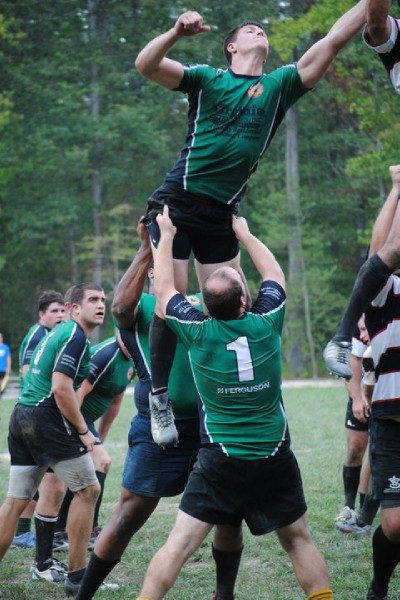 Both teams now prepare for a lineout. One of the opposing team's players (since our team put the ball into touch) prepares to throw the ball back in at the spot it went out. Each team has a row of players waiting to attempt to gain control. The opposing team calls out a play letting their players know where the thrower is going to place the ball. Our team watches their movement and identifies which player is going to jump. Each team has a jumper leap into the air and be hoisted even higher by his teammates as the ball is thrown between the two lines. They both grab for the ball, and our jumper gets hold of it.

Before he even hits the ground, he throws it to a waiting back. The backs charge ahead, passing the ball between them until they create an opening. As each is about to be tackled, he passes it to another, pushing the ball downfield until one manages to break away and run into the try zone. With opponents hot on his heels, he dives forward, planting the ball on the ground and scoring a try. Without any undue celebration, he jogs back to prepare for the next kickoff as our team sets up to kick for extra points.

There are a few other rules, and a lot more to learn, but this should give you a pretty good overview of how a game flows. To learn more, check the International Rugby Board's guide (warning: pdf). If you are interested in being a part of our team, check out our Introduction to the Club section and join us on the pitch.