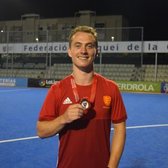 Woking Hockey club wish you all the best with your training !

Eddie joins a squad of 15 men's players who will train together at Bisham Abby for the majority of 2022. They will split into their respective Home Nations camps ahead of major tournaments, which includes the Men's and Women's Hockey World Cups and Commonwealth Games, culminating with the Olympics at Paris 2024. We wish him all the best with his training.

Eddie has been involved with Woking Hockey Club since he was a junior. He is an integral part of the junior coaching team and coordinates the hockey holiday camps.