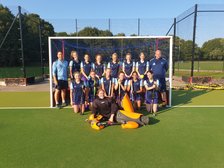 On an afternoon when most people were tucked up by the fire watch the TV, Woking Tigers and Reigate decided to face the storm and play their match. Both teams came onto the pitch keen to get on with the match no matter the weather. Both teams started well with an equal amount of pressure from both teams. Most of the play was in the midfield areas with neither team able to break through into the Ds.
Pressure continued from both teams and Reigate managed to push through into our D, coming away with some short corners. The first well defended by our plucky defence and the second being saved of the line with a stretching stick from Elise. Game remained 0-0 and Woking started to get some good forward pressure resulting in a short for the Tigers. A lovely injection to Issy who put in a good shot on goal, Nicola was there to tap in but unfortunately was just out of reach and it slid past the post. Half time 0-0.
The second half started much the same as the first with equal pressure from both teams. Reigate again were the first to get the short and this time after a very well worked set piece the ball was in the back of the net. 0-1. For a while it seemed that Woking were making mistakes and putting themselves under pressure, but the girls with a new lease of life started to push forward. Some great team passing resulted in a lovely ball across the goal but no one could reach it to tap it in. We were pushing forward and it seemed that a goal was coming. A strong strike on target was put in but was well saved by the goalkeeper.
Although having all the pressure for the last third of the match Woking couldn't find the net with the game ending 0-1 Reigate.
The teams were very well matched and all that stood between the teams was one set piece. With 2 chances for each team on target there really was very little difference.
Well done to both teams for braving the storm, a victory for hockey!!
Opposition man of the match- Cara
Martins man of the match- Elise
Share via
FacebookTwitter
https://www.pitchero.com/clubs
Recent news