Sal Butt, Helen O’Hara and Andrew Leighton-Pope had a busy time talking to the bank's customers and giving out leaflets, booklets and wristbands in an effort to raise awareness of the Club and rugby in the local area after the World Cup. Using the bank as a base, Helen also dropped leaflets into a local nursery, gym and several businesses in the trading estate. Overall a very successful day with a good number of people asking for information about our senior teams and youth rugby or wanting to talk about who the new England head coach might be ;) 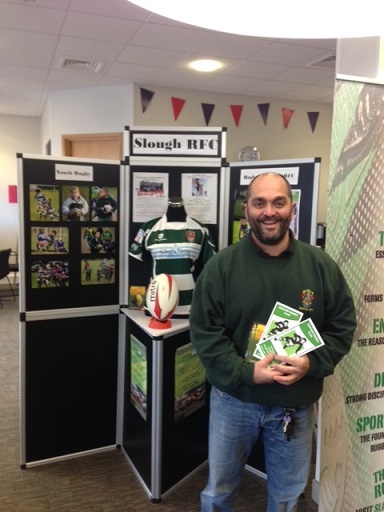 Many thanks to branch manager, James, for allowing us to set up our stand in his bank for the day; DHL who donated some freebies at very short notice and to Sal, Helen and Andrew for giving up their time to help and support :)

If you would like to get involved with future events please email maryblumbergs@gmail.com 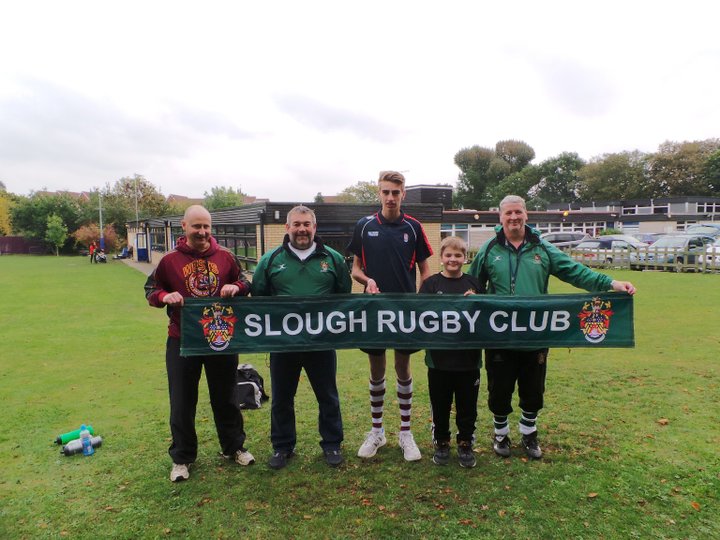 Callum Gray, Barry Dillon and Graeme Holdaway ran the pitches and refereed the games for the 6 teams that took part in the school’s 70th anniversary festival. All three commented on the good standard of rugby played and attitude in what was an extremely well organised tournament.

The Club's schools liaison officer, Dave Bishop, was also in attendance to touch base with teachers, distribute leaflets and offer general support during the three hour event and we look forward to forging a stronger link and future projects with this local school :)

Festivities kicked off at 2pm with a youth rugby demonstration before attendees were invited to ‘give rugby a try’ with a series of activities run by the club’s 1st XV. Participants took part in various passing exercises and tackle pad drills before finishing with a game of Touch Rugby.

There was also face painting, a visit from NatWest Bank’s Pigby, the Bombardier bus and a BBQ to help build up Rugby World Cup excitement before the clubhouse opened for its evening ‘ultimate club experience’ event at 6pm. 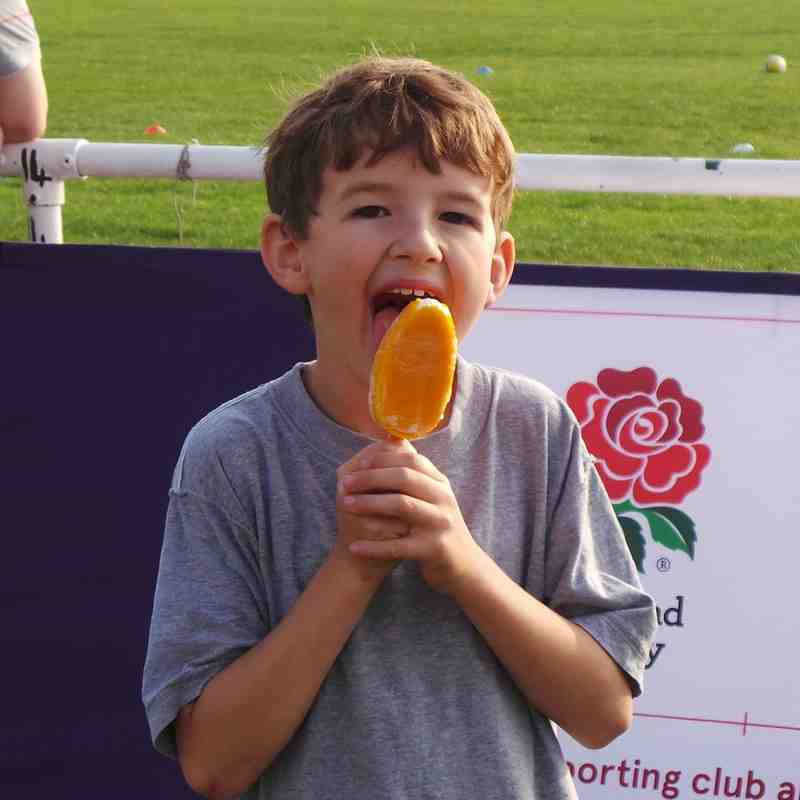 England and British and Irish Lions legend Lee Mears joined Slough Rugby Club to get behind England for the evening event. The former England hooker answered questions and signed autographs before settling down in the transformed clubhouse to watch England play Australia.

Slough Rugby Club was one of only 6 clubs nationwide to be awarded the ultimate club experience following a successful NatWest RugbyForce bid earlier in the year. The Ultimate Club Experience saw NatWest, via its agency M&C Saatchi Sport & Entertainment, work with the club to deliver a bespoke experience on Saturday including bringing a bit of Twickenham to the club with impactful décor and goodies, a plasma screen, momentos and support for the day.

A spokesperson for the club said it had been a very successful day. ‘We’re all about offering opportunities to play rugby, from young children through to seasoned vets, so it was great to see so many new faces, inspired by the Rugby World Cup, turn up to give rugby a try. The evening event exceeded expectations with tickets selling out in advance. It was a great night even though England were knocked out of the World Cup!’ 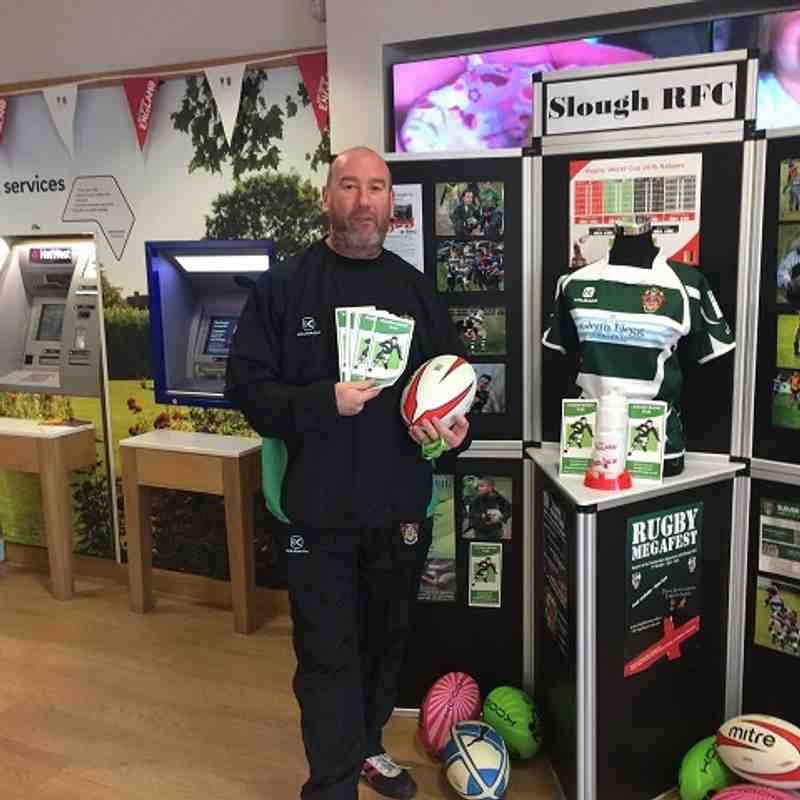 Slough Rugby Club was pleased to take Natwest up on its offer of utilising some space in their High Street branch to promote the Club, Rugby and the 2015 Rugby World Cup this week.

Paul Thompson, Tony Day and Helen O’Hara ran the Club’s promotional stand over two days spreading the good word that is Slough Rugby Club amongst the bank’s customers and inviting them to join us this Saturday for the Megafest!

Overall, a good couple of days spent promoting the club and interacting with the local community which will certainly have raised awareness of the club in the local area ;)

Natwest Slough have also invited us to take our promotional stand to other branches in the area during the World Cup and beyond which is great and we look forward to utilising this new means of promotion for future drives and campaigns.

Many thanks to Paul, Tony, Helen and Matt for giving up their time to help out with the promotion this week. If anyone would like to help with future events please email maryblumbergs@gmail.com. 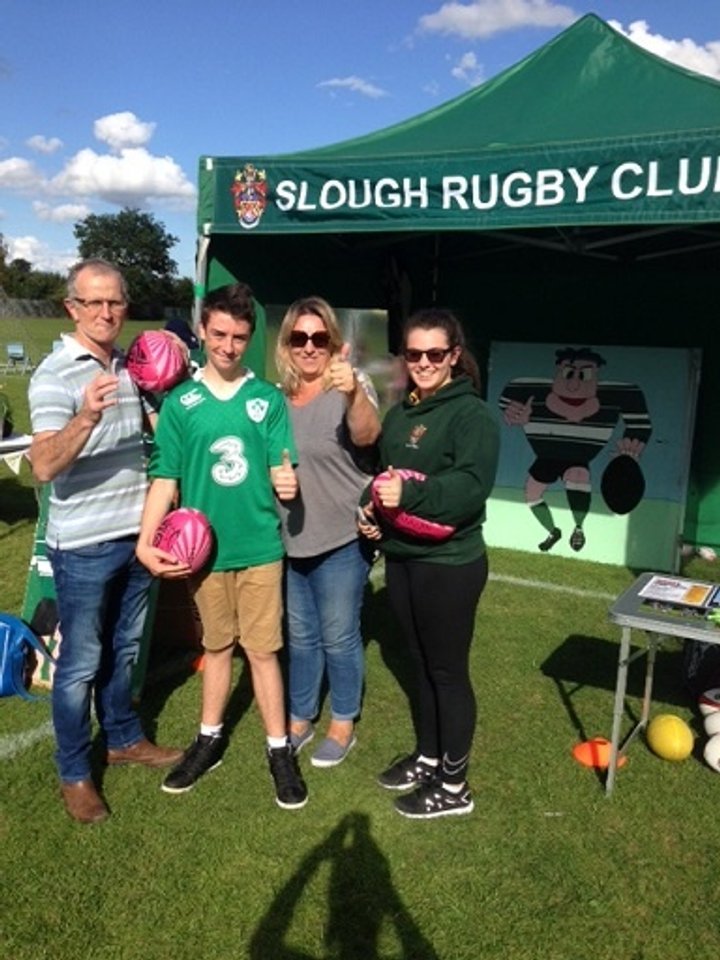 Our Throwing Challenge proved a popular attraction with many students wearing one or more of our wristbands by the end of the day, and a good number kicking and throwing about the mini rugby balls they had won at our stall.

Many thanks to Ned and family who came along to say hello and stopped to help out towards the end of the day. Much appreciated!

Overall a successful day and a welcome opportunity to get involved in one of our local schools. We hope to welcome some of the pupils, families and staff to the club in the near future and wish the Mission to Thailand team the best of luck :)

With the new season almost upon us Slough RFC set up camp in the Slough Observatory shopping centre for a day...

Slough RFC set up an information stand in the Slough Observatory shopping centre on Friday to raise awareness of the club and upcoming Rugby World Cup. 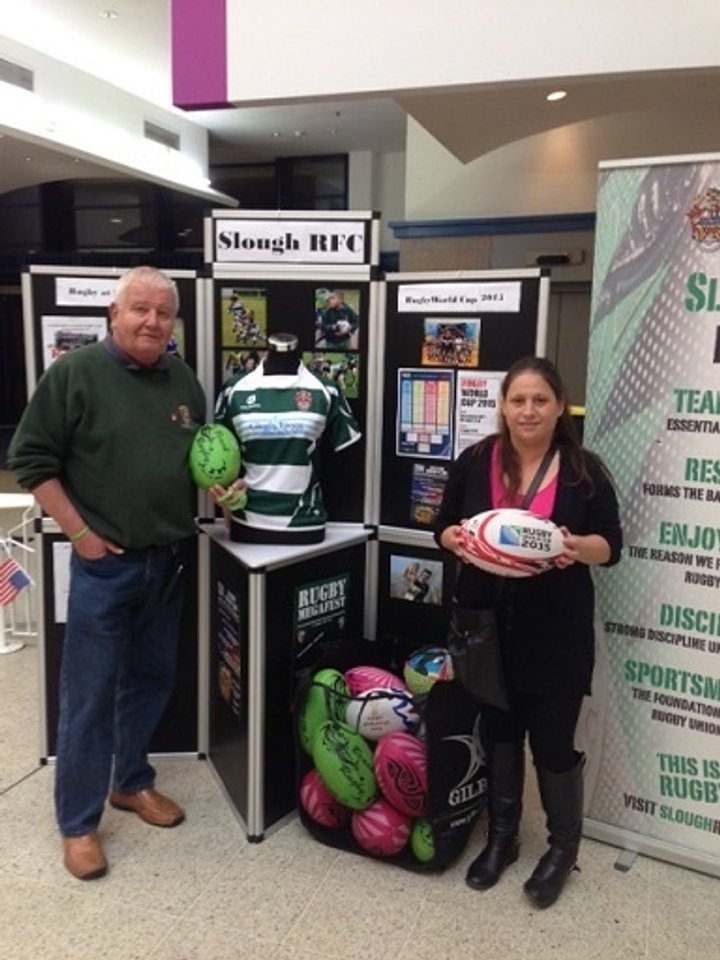 The information stand was situated outside Primark and included an eye-catching display of photos and posters while passers-by were encouraged to stop, have a chat and take a leaflet and/ or wristband. As well as enabling us to have a presence in our own town centre, having a base set up in the Slough Observatory allowed us to concentrate our efforts and blanket the area so as well as talking to shoppers we were able to drop leaflets into all the shops, cafes and other businesses located there.

A very big thank you to Mike Wild, Geoff Belsen, Louisa Caldwell and Shelley Pigott for giving up their time to help and support throughout what proved to be a long, but hopefully successful, day.

Slough Rugby Club was pleased to take the club stall to the Polish Club's 2nd annual family picnic this weekend.

Lovely afternoon at Slough Polish Club and despite being sandwiched between Slough Town FC and a childrens’ football club( not the ideal place for a rugby club as you can imagine!) we had a steady flow of people visit throughout the day to take part in our throwing challenge and find out more about our youth training, senior rugby and the Rugby World Cup.

Overall it was a pretty successful day! Thank you to the Polish Club Slough for inviting us again :) 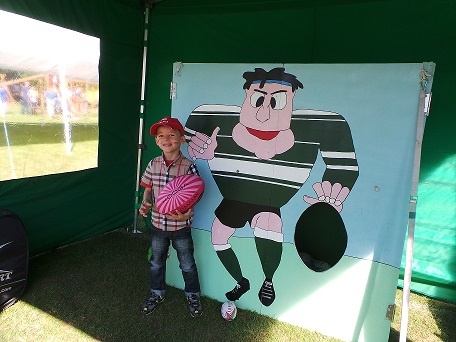 Last year’s Langley Carnival was the first outing for our Club stall so we were pleased to be invited to return for this year's event.

As well as the now familiar sight of our gazebo and Throwing Challenge, this year we also had an hour slot in the central arena to showcase the club. Our U9s and coach Carl took full advantage of this and put on a great display which included training exercises, tag rugby, contact rugby and a match while youth Chairman Andrew Leighton-Pope provided a fine running commentary for the crowd about the display, the stall and the Club.

It was an extremely hot day and everyone worked really hard to promote the club so well done all! It was also really nice to see so many club members turn out to support us and this great community event. 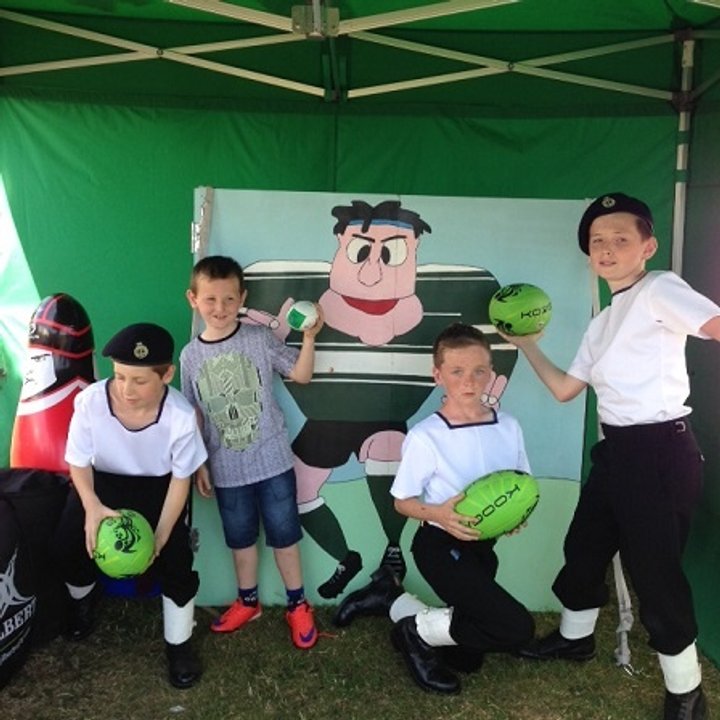 Iver Party in the Park

Saturday saw Slough Rugby Club attend Iver’s annual 'Party in the Park'. A great day was had with a good number of people taking our Throwing Challenge and asking for more information about the club. Our branded mini rugby balls proved to be very popular and it was great to see loads of kids and families still playing with them as we left at the end of the day. 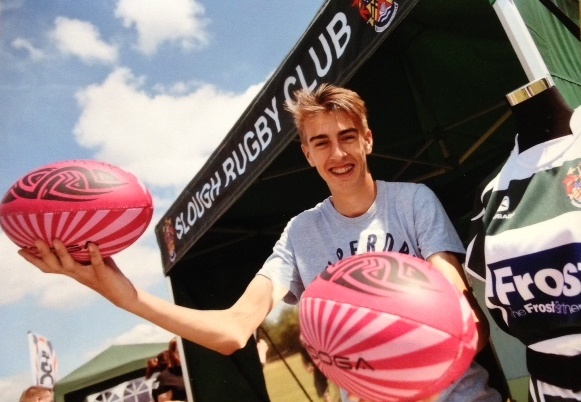 Slough Rugby Club was pleased to have a presence at St Mary’s school fete on Friday at the invitation of one of our young families. It was a great opportunity to get involved in a local school’s social scene and be able to give local families information about our rugby club which is right on their doorstep ;) 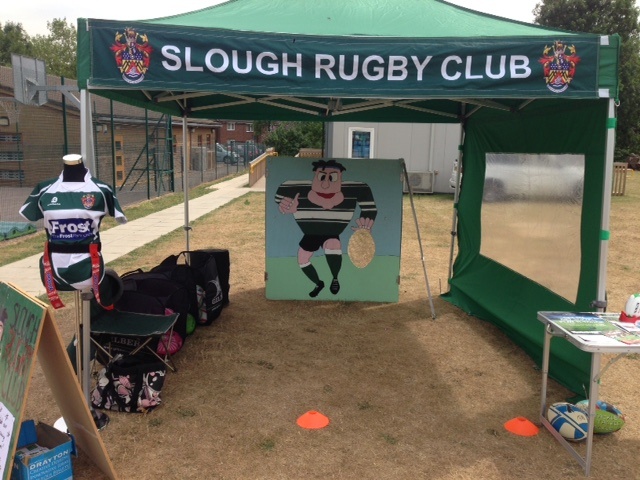 Slough Rugby Club had a great day at the annual Stoke Poges village fete yesterday with a good number of people visiting our promotional stall to ‘give rugby a try’ and find out more about the club. There was lots of rugby talent apparent on the day as we nearly ran out of prizes and we also had someone score the full 6 out of 6 in our challenge which was a first, so well done Stoke Poges ;) A great day all round and we’re already looking forward to attending again next year! 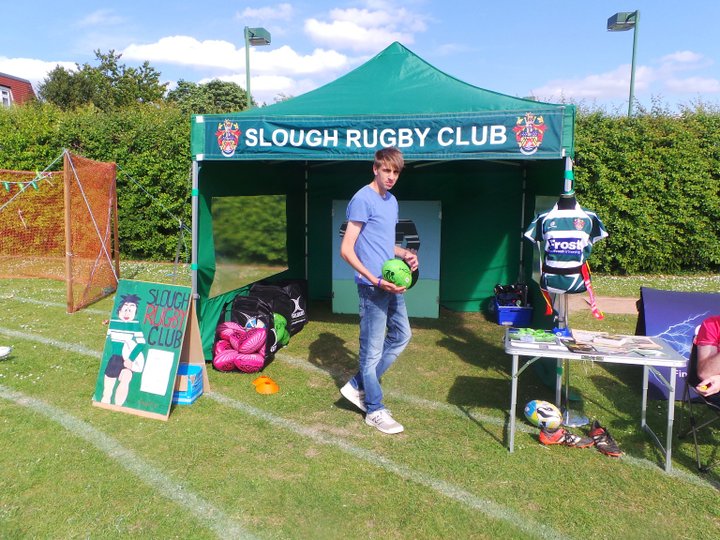 Slough Rugby Club was pleased to attend the annual Burnham Donkey Derby this weekend, giving people the opportunity to handle a rugby ball with our Throwing Challenge while raising awareness of the club and rugby provision in the area.

Among those trying their hand at our challenge were a Club VP, players past and present from a variety of other local rugby clubs and several council officials. It was a very good and busy day and we look forward to attending again next year. 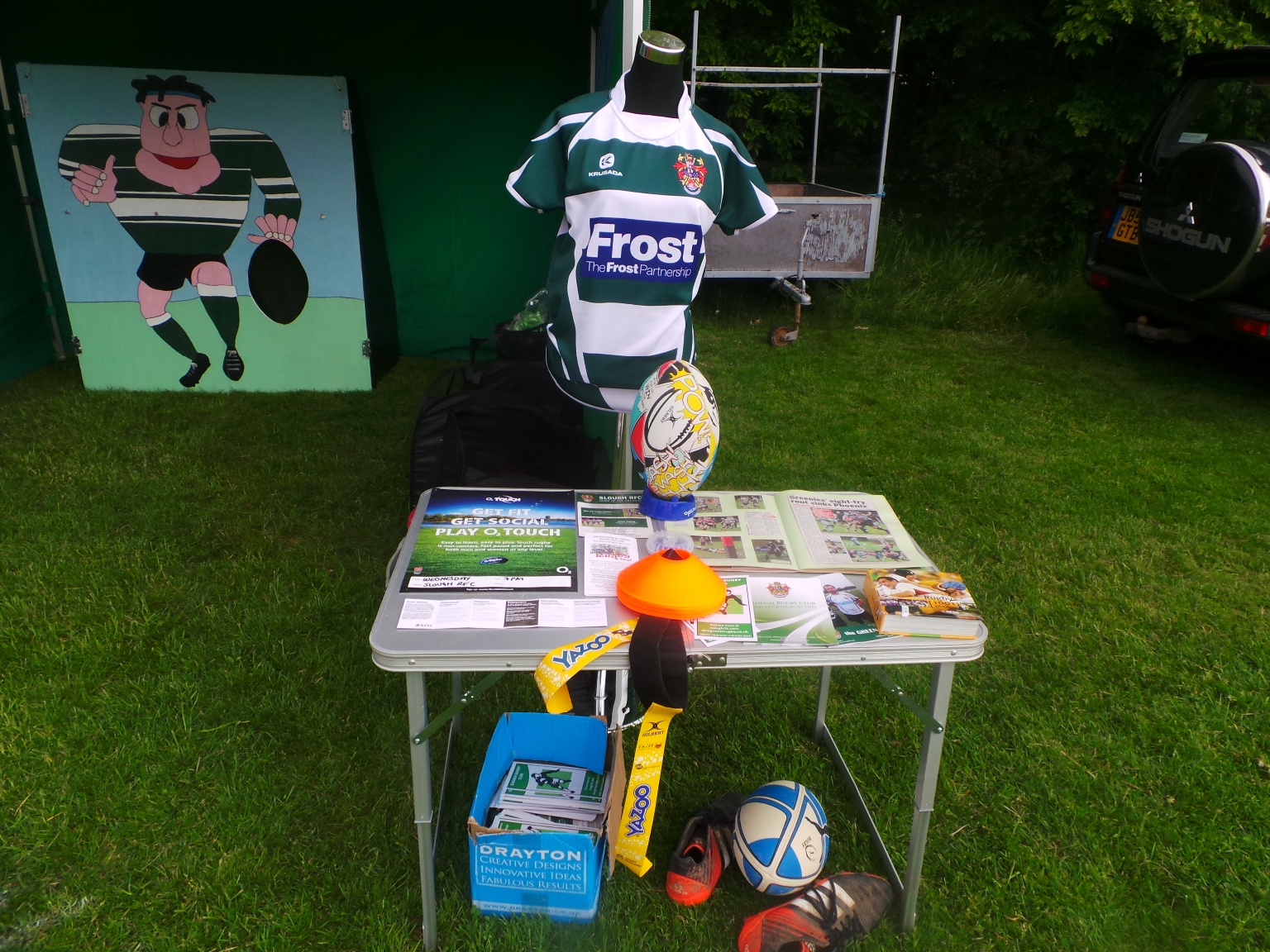 Slough Rugby Club brought the Club stall out of hibernation to attend the Langley College Open Day for the first time over the weekend. 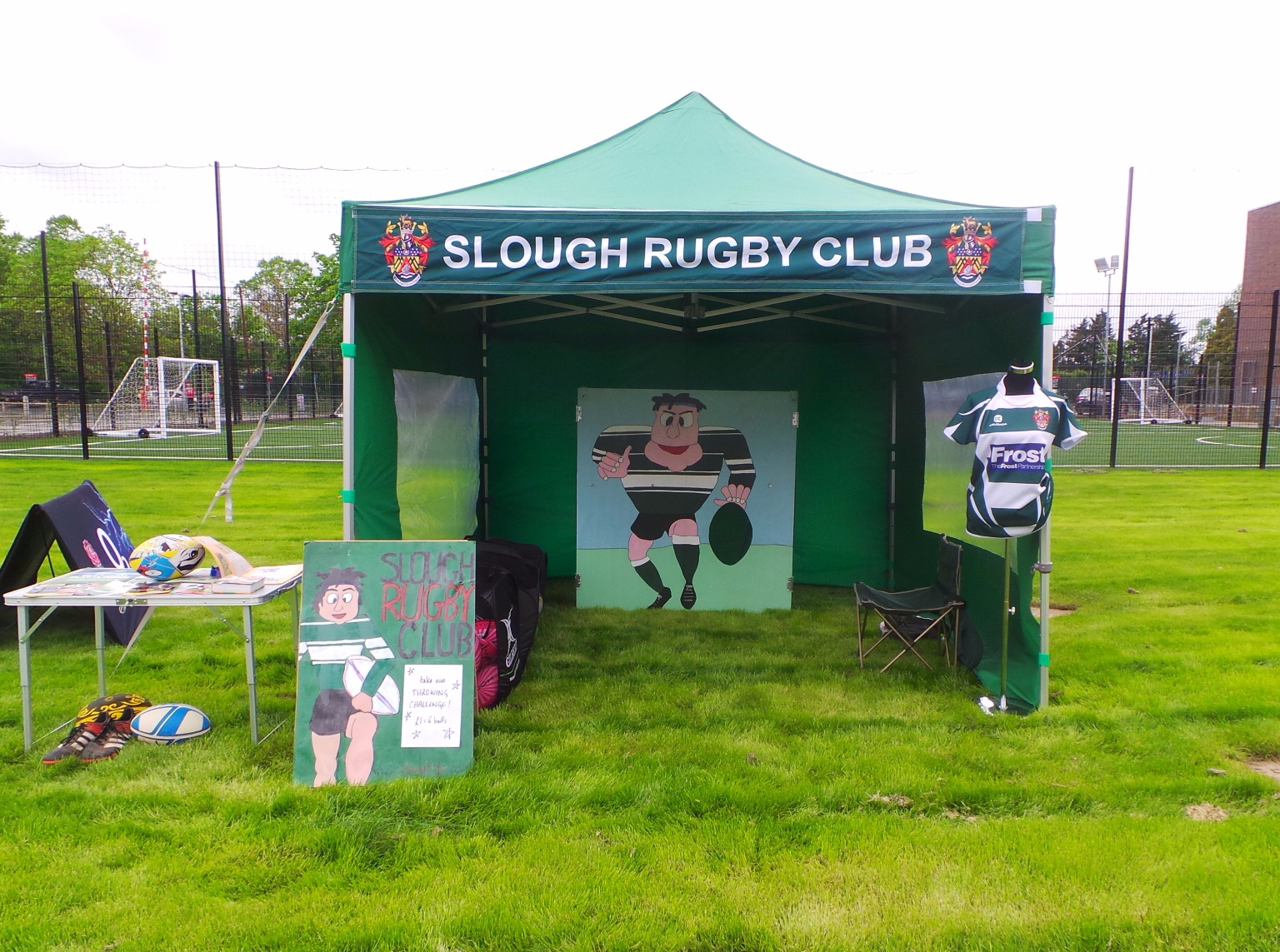 The stall included a display of posters and newspaper clippings and gave people of all ages the opportunity to handle a rugby ball by inviting them to take part in a throwing challenge. Despite it being a very blustery day with a threat of rain there was a fairly good turn out and a good number of people visited our stall to take the challenge and find out more about the club.

Slough RFC was pleased to be the venue for London Irish RFC Girls' Rugby Clinic and Festival. 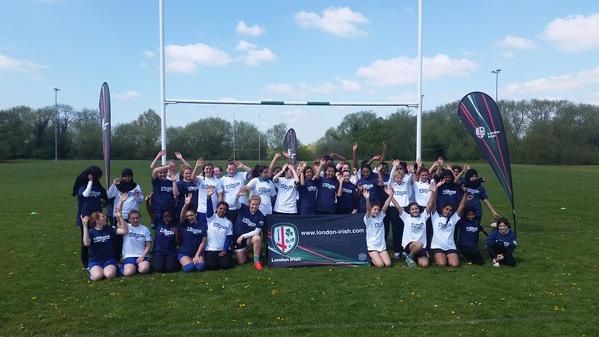 Year 7 teams from Langley Academy, Slough and Eton and St. Joseph's all got to use the clubs facilities on Monday in a mini festival of rugby.

The schools are taking part in a three year RFU initiative to increase participation in the sport of rugby. Head Coach at Slough RFC, Darran Brown, has been delivering the scheme and believes that over time the project will pay dividends for the club and its growing Minis and Junior section.

"To be fortunate enough to take rugby in to the local schools has been a great privilege for me" he said, "hopefully some of the guys and girls will one day be playing senior rugby at Slough along with representative honours. The pupils have been brilliant to work with and the school support has been exceptional in all three schools."

The mini festival was a chance for the players to visit the club, play on the first team pitch and use all the clubs facilities. They were fed and watered afterwards, which went down really well.

Pupils from local schools battled it out in the annual Slough Schools Tag Tournament held at the club today.

The tournament saw children aged 7 to 11 take part in round robin pool stages followed by knockout semis and finals.

Helen, Barry and Matt were in attendance on behalf of Slough RFC to chat to players and teaching staff about rugby and the club throughout the day.

Despite a relentless blustery wind it was a good day with some very promising rugby on display and we would welcome any of today’s participants back to the club one Sunday to take their rugby further.

Well done to everyone that took part and congratulations to eventual winners Lynch Hill.