Pupils at the school have recently received coaching from England Ladies World Cup winners Rocky Clark and Kat Merchant, and as part of the sports day were able to test their new skills in an inter-house rugby tournament- which our coaches were only too pleased to help guide and referee!

U11s coach Barry said he was very impressed with the standard of rugby seen, noting that games had been played with enthusiasm, verve and skill.

Many thanks to Slough & Eton College and Andrew Leane for inviting us to this year’s Winter Sports Day. We hope to see some of the boys at the club in the near future, and we look forward to attending again next year in what has become an annual fixture for the club :)

Today Mary Blumbergs and Helen O'Hara took the club stall to Iver's annual Apple Day. The stall included a display of club leaflets and programmes, recent newspaper clippings and rugby balls, and gave people of all ages the opportunity to handle a rugby ball by inviting them to take the Slough RFC Passing Challenge. It was also the first outing for the new club gazebo which held up well and looked great! 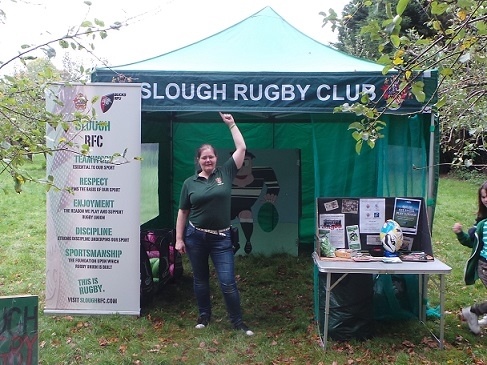 A good number of people visited the stall, took the challenge and asked for more information about children's training, 1XV match days and the social side of the club so overall it was a pretty successful day :) We look forward to attending again next year.

Click to view photos of the club at Iver Apple Day

Slough RFC held its M&J open day in glorious weather on Sunday with a number of children aged 5- 12 coming along to give rugby a try or to make enquiries throughout the morning.

The event took place at the Club’s grounds in Upton Court Park and was a chance for local children to give rugby a try and find out what Slough Rugby Club can offer them.

Unfortunately the bouncy castle failed to materialise however there were rugby taster sessions for U6-12s, an U14/15s match to watch, a table-top sale, raffle and the club’s events stand which proved popular with club members and visitors alike.

Youth Chairman Andrew Leighton-Pope hoped the open day would encourage more children in the area to think about taking up rugby. 'It is all about encouraging young people to play rugby and the open day allows us to speak to children and explain why it is important to play sport' he said. 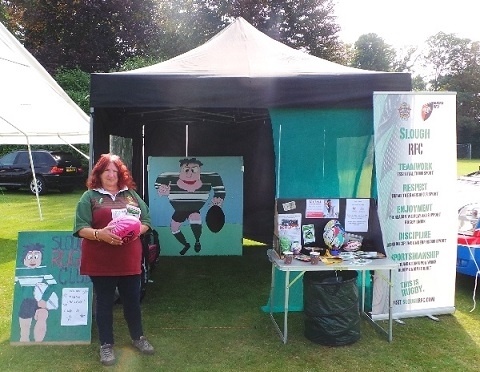 Mary Blumbergs, Sandie Belcher and Pete Belcher attended with the club stall inviting people to come and give rugby a try. We were also invited to get on stage to say a few words about Slough Rugby Club and what we offer to the local community :)

There were lots of stalls at the event including Polish delicatessens, pottery painting and a bouncy castle as well as a mini fun fair. Groups and clubs put on displays and competitions in the central arena and later on bands performed. It was a lovely day which we really enjoyed and we thank the organisers and members of Slough Polish Club for making us welcome. 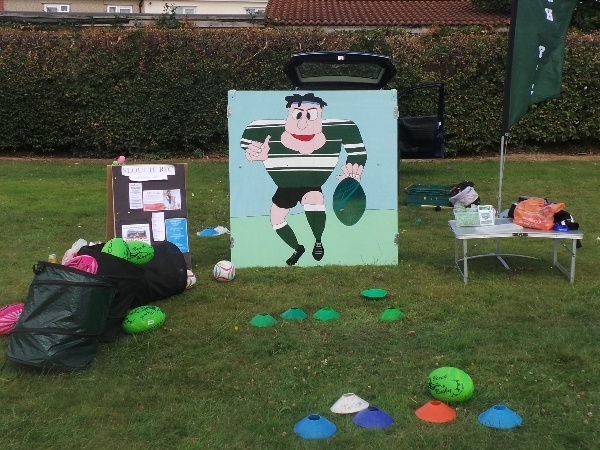 Slough RFC was pleased to be able to offer Langley Academy the use their grounds and facilities this week when the entire school took part in a sponsored walk to raise money for charity in memory of two of their fellow pupils who passed away earlier this year.

The 600+ students and teachers walked from their school to Upton Court Park where they spent some time at the club before heading back to school via Kedermister Park along London Road and up High Street to complete a 7 mile circuit.

Parents and members of the community are invited to help the school raise funds for both The British Heart Foundation and Asthma UK and we wish them all the very best with their fundraising efforts. 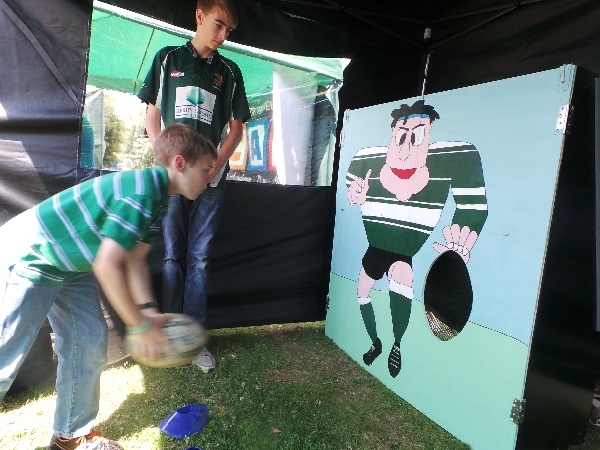 The stall included a display of books, club shirts, rugby tags and belts and gave people of all ages the opportunity to handle a rugby ball by inviting them to take the Slough RFC Passing Challenge.

Every participant in the challenge, which involved throwing various sized rugby balls through a hole, won a fab Rugby Core Values wristband and those getting 5 out of a possible 6 won a rather snazzy little rugby ball!

We invited London Irish mascot, Digger the Wolfhound, to join us as a special guest for the day and he had a great time taking part in our Passing Challenge, mingling with the local community and was a big help in giving out leaflets to help us promote the club ;) We really appreciate Digger taking time out of his busy schedule to join us for the day.

All in all it was a very successful day out for the club and we look forward to getting involved in more local community events.

Click to view photos from our day at Langley Carnival 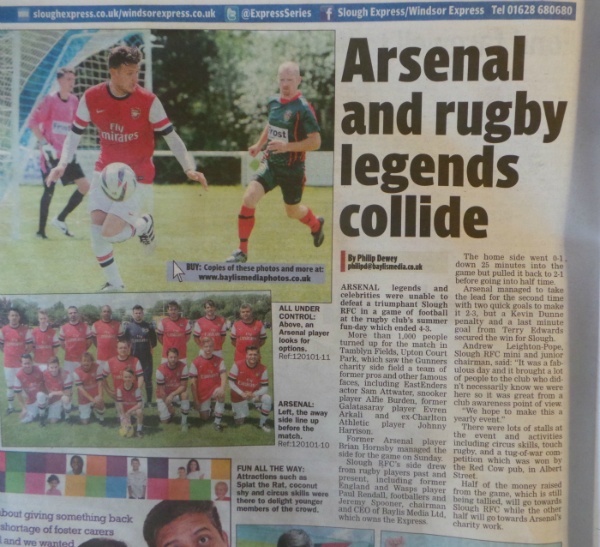 Around 40 children took part throughout the session where they learned some basic rugby tagging and passing; the afternoon culminating in a tag rugby match to try out their new skills.

The children all seemed to enjoy themselves and Andrew, Barry and Colby did a grand job of representing the club :) Many thanks to the staff and pupils at Ryvers for making us feel so welcome.

Pupils from local schools battled it out in the annual Slough Schools Tag Tournament held at the club today.

The tournament, organised by Slough School Sport Network, saw children aged 7 to 11 take part in the round robin pool stages followed by knockout semis and finals.

Coaches Helen, Barry and Mary were in attendance with advice if needed and to chat to the players and teaching staff throughout the day.

Despite some rain it was a good day with some promising rugby on display and we would welcome any of today’s participants at the club one Sunday to take their rugby further.

Well done to everyone that took part and good luck to both Marish Primary and Lynch Hill who go on to play in the Berkshire Games next week! 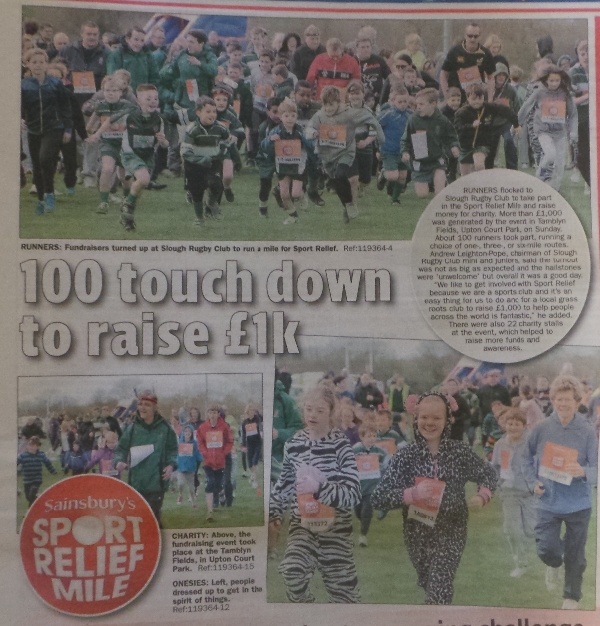 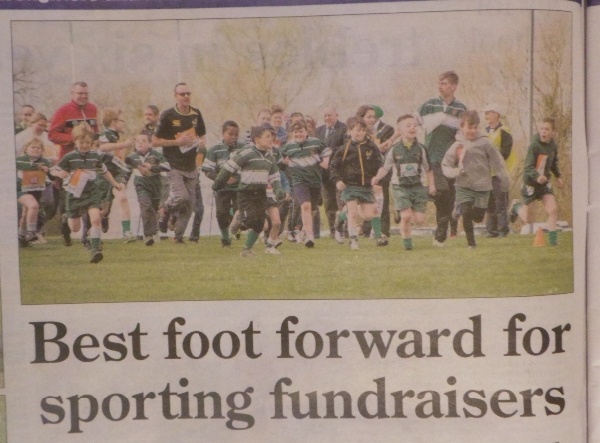