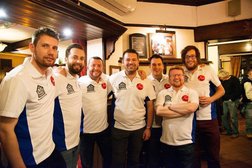 Wyre Cricket Club has a long and storied history since 1994.

We have played our home games at ICI, Baines, Myerscough, Rossall and Cottam Hall throughout the years and hundreds of players have played for us. Some players in particular have have particularly storied careers, such as our Club President in Perpetuity Pete Snape, Steve Rawcliffe, Rob Abbott, Chris Gregson, Tim Bernstein Jon Hargreaves and James Bamford (to name but a few).

We are not your ordinary cricket club, and the fun and social aspect is important, as is our clubs history.

We hope you enjoy the history below, created by our statistician and club stalwart, former chairman and 1st XI captain, James Bamford.