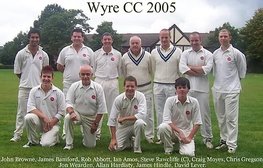 We played at Baines between 2000-2005 and since the School is over 200 years old perhaps we used the oldest ground in the Fylde League! Form has fluctuated since then, in 2000 we were relegated back to Division II and promoted again in 2001 and the two divisions amalgamated in 2003 to form a single Fylde League and since then we have been a mid table team with flashes of brilliance.

Several players have won individual awards, most recently in 2003 Chris Gregson and Pete Snape winning the Fylde League batting and bowling prizes respectively. 2004 was a frustrating season with poor league form and a controversial defeat in the Wareing Trophy semi final at Preston, but a relatively good end to the season meant the team looked forward to the 2005 assault on League and Cups with anticipation.

The 2005 season was a big improvement on the previous summer. The team played in a positive manner throughout the year and got off to a good start to get into contention in the league. However performances against the top teams were not good enough and so we ended the year in 4th place, still hungry for success and the title. The 20:20 team played excellently, winning their first matches in years and winning their mini series. There were some notable individual performances during the year, Rob Abbott getting onto the all time high scores list on day 1 of the season, and Steve Rawcliffe bowling magnificently all summer, getting 2 performances onto the all time list, with his 8 for 19 against Anchorsholme the club's best ever figures.